The train station in Munich was vast and interesting. We quickly learned the difference between a first class ticket; lounge with restrooms and snacks – and everyone else (restrooms in the basement.) Newell dropped Tim and me off at the station with luggage so he could return the rental car and catch a bus back to meet us. As we waited on the platform, we endulged in some serious people and pigeon-watching. (Note from Tim: vegan yogurt – just say no.)

The 8-hour train ride took us through the Alps and into Tuscany; a lovely journey for an autumn day.

We had bought books to read and shopped for lunch on the way to the station. I thought I would get bored, but I was wrong. Watching the variety of landscape and quaint villages as we sped past was anything but boring. We met other travelers and shared their stories; like the elderly Englishwoman who had been visiting her brother in Germany and was on her way to see Venice for the first time. Her husband was worried that she couldn’t manage her luggage, but Tim stepped up and gave her a hand.

We arrived in Florence and took another train to Pisa where we were met with a familiar and family face; our Andrew! It had been a year and a half since we saw him before he and his family deployed to Italy. After 2 1/2 weeks of travel it was wonderful to be greeted in a faraway land by a loved one. Props to Annie for making room for the in-laws for 10 days!

We arrived at the Chaddock’s house late in the evening, but 1 1/2 year-old Ender was awake to greet us. Tired from the train ride, we were glad to be there with 2 of our sons and family.

The next day we went onto base with Andrew to meet his “family” at work. The US Army shares a base with the Italian military, it was an interesting arrangement. The sacrifice our soldiers and their families make takes many forms; besides the dangers they face, for some its being so far from family during holidays and special times.

Americans abroad have to dress unobtrusively to not draw attention; soldiers have to change on base, no uniforms in public.

After watching for terrorist attacks throughout the trip, I naively thought we would be safe in Italy (ahem; the Cosa Nostra…) Wrong. We were informed that Rome was one of the top potential targets and it was suggested we avoid going into the Eternal City.

The following day we took a train to Florence to see the artistic treasures there.

The first thing we saw in Florence was Il Duomo, a cathedral built over several centuries ( exterior 1296 -1436.) The facade  features multiple colors of marble, statues of apostles, saints and Biblical personages. 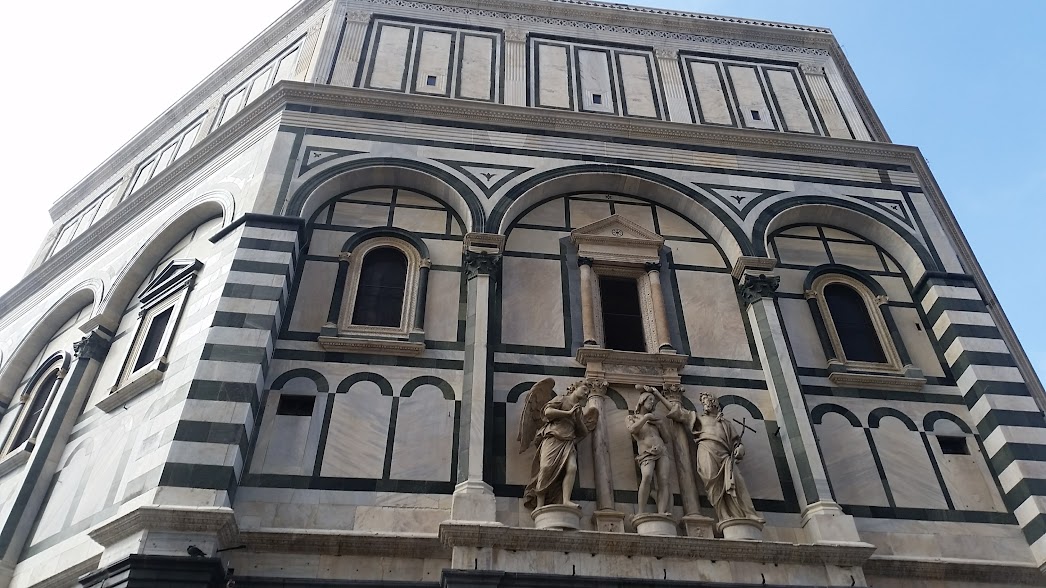 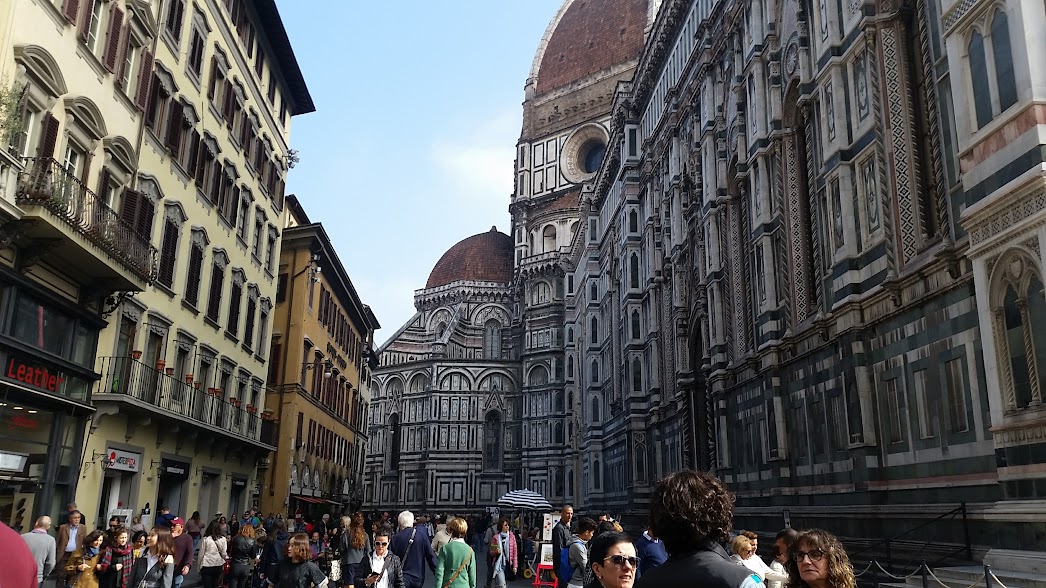 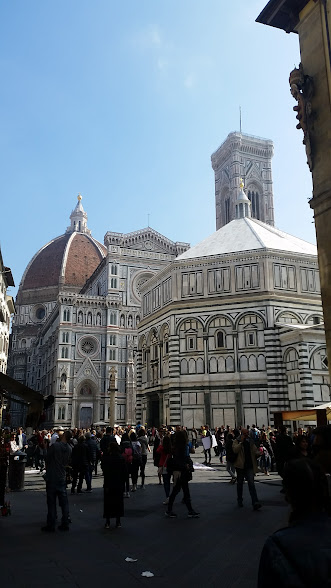 Andrew had suggested we make reservations for Galleria dell’Accademia to view Michelangelo’s David. A very wise move for a Saturday visit. We had heard and verified that David would be taken off display for a while due of stress fractures developing in the statue’s ankles . A trip to Italy without viewing David? Inconceivable. There was a very long line to get tickets. People were hawking tour packages to get you into the building faster, at a fairly expensive price. Reservations in hand, we skipped the long line.

Viewing the gorgeous marble statue so elegantly crafted, one could almost forget the Biblical story of the young shepherd  about to face the giant impugning the armies of Israel and their God. One look at that attitude and posture and you know how that battle is going to turn out. See 1 Samuel Chapter 17 in the Old Testament of the Bible for a great tale of faith and fortitude. 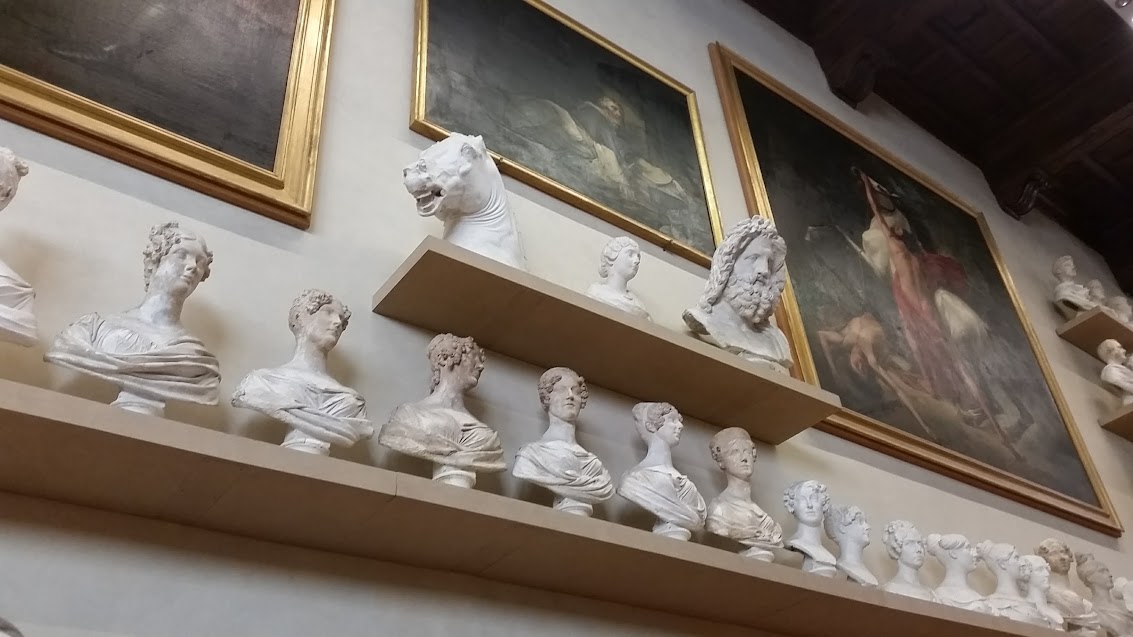 After the Galleria’s collection of Michelangelo’s art, my favorite exhibit was the cemetery art. Young sculptors could get commissions for statues and memorials for wealthy families.

The hall was filled with hundreds of busts and statuary that patrons could reference to create memorials for loved ones. After altering the dimensions of facial features, the piece would look the the intended.

I also appreciated the gilded altar piece collection. In addition to representing the value the church placed on holy items, the gold would glow in the candlelight of the often dark chapels, illuminating the images.

From there, we went out into the afternoon Florence streets to explore. We had some serious souvenir hunting to do for the grandchildrens’ Christmas gifts. We found a gelato shop that was calling our name and a pizza place that wasn’t.  Not a fan of Italian pizza.

I love good display and marketing and this shop nailed it. Each flavor of gelato had large slices or chunks of representative fruit or chocolate embedded in the creamy mounds. You can see berry, honeydew and cantaloupe in the front of the case. Did I mention they had coconut? I was a happy camper; we shared a large coconut gelato – my first ever. It was worth the wait.

We discovered a Jewish synagogue that had a distinctive Middle-eastern style. 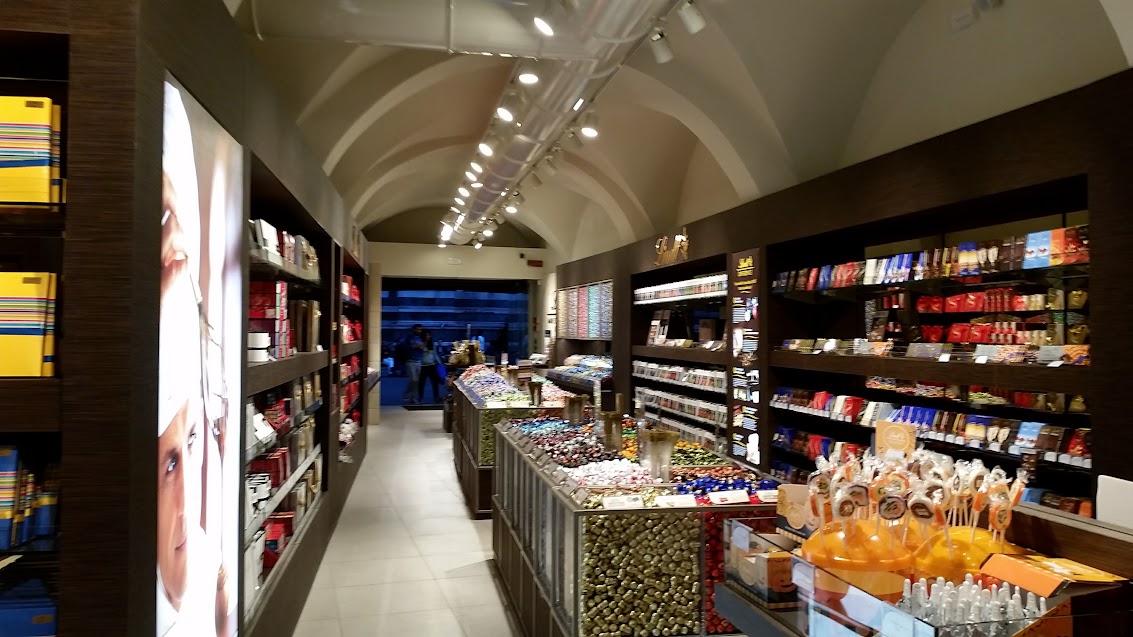 A Lindt chocolate shop and a fun gift shop with Danish products, I was tempted to buy but was informed that the gift items we buy in Italy should be Italian. So leather it was. Florence is known for their diverse and beautiful leather products; we bought wallets for the older grandchildren.

The evening was coming and it was time to bid arrivederci to Firenze, the birthplace of the Renaissance. 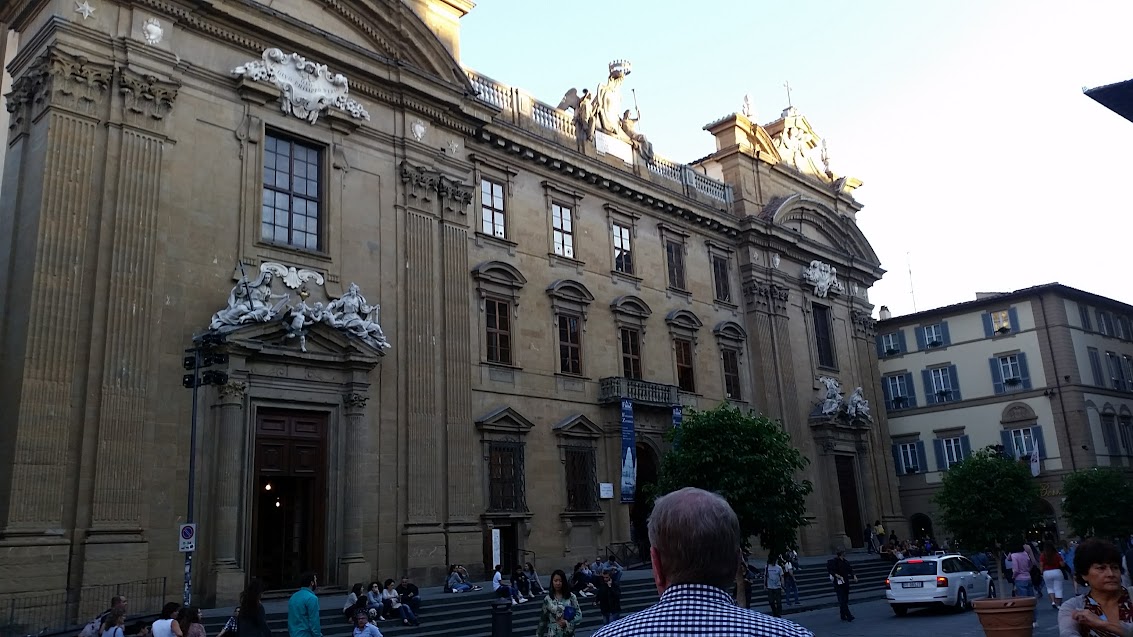 Endnote: Check the Galleria’s website for open days and hours and try to get your reservations at least 4 days ahead off-season. If the lines are too long, you will not be able to get tickets.

If you grew up with the Disney classics and would love to see them again, here is a website that has scads of old Disney movies:

I can’t vouch for the quality;  however if you are missing the oldies-but-goodies, you can view other favorites as well.

Visiting Germany certainly introduces one to vibrant cultural contrasts. As in a dream, one day you may be experiencing a fairy tale town such as enchanting Rothenburg ob der Tauber, the next day the nightmare of Dauchau. Such is the reality of Bavaria.

The Black Forest in Bavaria in southwest Germany is the site of many of the tales by the Brothers Grimm. Legends say that the brothers were inspired by this beautiful area when they wrote Hansel and Gretel, Rapunzel and Sleeping Beauty.

Come to think of it, many of the fairy tale lands were not always that safe either…

We had just a short time to drive around the Bavarian charmer called Rothenburg. Built on a river, the walled-city began in 970. It has had its ups and downs like any 1,000 year-old city started in a medieval era, but in its current state, boasts a dear collection of restaurants, shops, historical pageants and businesses. We saw only a small part of the the town and regretted that we didn’t arrive early enough to tour the village (translation: shop for Christmas.)

It was raining and dark the night we left Neuschwanstein castle heading toward Munich. The highways in Germany have an interesting habit of winding through towns. In the U.S., we exit our freeways on the outskirts of town but in the parts of Germany we visited, the roads and roundabouts take you right through the middle  of the village.

At the Griesbrau in Murnau, we stopped for dinner and were pleasantly surprised.  Now we were wandering, trying to find hot food,  and in the center of town we came across an old stone building with gleaming copper vats in the entry and dried hops hanging from the rafters. This restaurant was so charming (and crowded) that we had to grab the last table amid the stares of, who I assume were, the regulars. The waitress gave us the stank eye when we didn’t order alcohol ( we were used to that) and we were directed to the buffet/bar.

A hearty-looking bearded gentleman was carving roasted meats and filling plates with sides. There were 3 or 4 choices of each; Newell had pork bellies (sliced like bacon), Tim had roasted pork knuckle and I had ribs (a rack so large they lapped over the side of the generous plate). Newell and Tim had kloesse (potato dumplings)  and I had a stuffed baked potato, I am still so American. We all ordered the sweet and sour red cabbage. A truly fun dinner concluded an interesting day at Neuschwanstein castle.

Arriving in Munich, we discovered that our Airbnb host had asked a roommate to let us in, but he had taken “the wrong plane” and would be arriving late. We parked our compact car up on the sidewalk to avoid being hit in the center of the narrow street and rested until the man arrived so we could settle in for the night.

After he finished some vacuuming and bed-making, we were ready to call it a day.

I had heard about the museums and galleries in Germany and was anticipating viewing the great art there, but Newell had another idea. Instead of heading into the heart of town, he drove us to the north to visit the memorial at the former Nazi concentration camp at Dauchau.

As painful as it was to read the narratives and view the photos of glassy-eyed, starving and hollow-cheeked prisoners, reality hit me hard when we approached the ovens of the crematorium. 41,000 prisoners, all men, had their lives ended and mortal remains destroyed at this horrible place.

I’m very protective of the lives of American soldiers, after all I am the mother of one. As we toured the D-Day invasion sites on the beaches of Normandy, I wondered if the spilling of so much American blood was worth it. Upon visiting Dachau, I concluded we should have intervened sooner. Sacred to the memory are the soldiers that sacrificed their lives to save their fellow humans from the horrors of places such as the concentration camp at Dachau. We must never forget and never allow these atrocities to occur again.

In studying interior design and art history, I had learned about architecture  as art, the Dauchau Memorial was used as an example. After this heart-wrenching excursion we ventured into Munich for dinner and a look at the city.

We found a local hangout, Andy’s Krablergarten, and were seated at a long refrectory-style table with a family from Australia. Newell and I ordered schnitzel, pounded-pork cutlets dredged in flour and spices and deep-fried. Between that and the salad and French fries, I didn’t think I would ever need to eat again after that meal.

We wandered downtown for a little while and ended up in a bookstore (such is a night on the town for authors.) Newell has collected Astrix and Obelisk comic books since he was a teen living in Germany.

He found a few more to add to his impressive collection. I found the English-language section and bought C.S.Lewis’ “The Four Loves.” Well-fed and well-read, we headed back to pack for our 8-hour train ride through the Alps and into Tuscany to see our son and his family near Pisa.

We did it; we are going for the silver! Happy 25th Anniversary to my partner in time (and hopefully eternity), the father of Tim and the other half of McMurtry Creative Media. 25 years ago he married me, my 4 kids, my hopes and dreams, extended family, quirks, talents, body and soul.  I got a priesthood holder, stability, humor, 2 more sons and lots of love. What an adventure we have had; we are still looking forward to a few more laps together.

At the end of the day I’m always glad to see him and that is good. 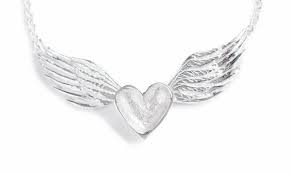 For both of us, marriage the second time around has been satisfying – we’ll take the silver.