We flew from the Paris Charles de Gaulle airport  on a Saturday morning and arrived in Dusseldorf Germany where we rented a car to tour the southern part of the country. We had learned to choose the smallest car available and were again rewarded for this wisdom while driving and parking on Munich’s narrow streets.

Having spent many happy days on the streets of Disneyland while growing up,  Germany didn’t seem all that unfamiliar; a sort of cross between Tomorrowland and Fantasyland. Walt Disney’s Mom Flora was born to German parents who obviously had some cultural influence there.

The day was rainy and gray but we were excited to visit more historical family sites and see where Newell had lived as an exchange student in high school and as an LDS missionary.

We stopped at a market to buy food for lunch and were rewarded for parking in the wrong place by a woman who blocked our car so we couldn’t leave. Her act of unkindness caused us to miss the last tour of Charlemagne’s castle at Aachen. Note to locals: please have some patience with drivers who may not be aware of the unposted rules.

The unremarkable market had a remarkable bakery; thank goodness for quality-conscious businesses. We sampled several German breads (delicious) and pastries (not as good as French but still delicious), local produce, meats and cheeses. All very good. We traveled on to Aachen.

We were pleasantly surprised to find a prosperous community, probably not surprising since the capitol of the kingdom of Western Europe had moved there in the early 800s. The medieval king Charlemagne, grandson of Charles “the Hammer” Martel  had inherited a large and diverse kingdom which he united through many means. He was regarded as “the Father of Europe” and was the first Holy Roman Emperor; crowned by the Pope on Christmas in 800 A.D.

Charlemagne’s contributions included communication and education – he built free public schools for all children regardless of their financial status and had Latin taught throughout the country. He developed a standardized alphabet called Carolingian Uncial and encouraged literacy. As a high school art student, this font was one of my 2 favorites, I din’t know at the time I was a great…great granddaughter of the man who had it created. 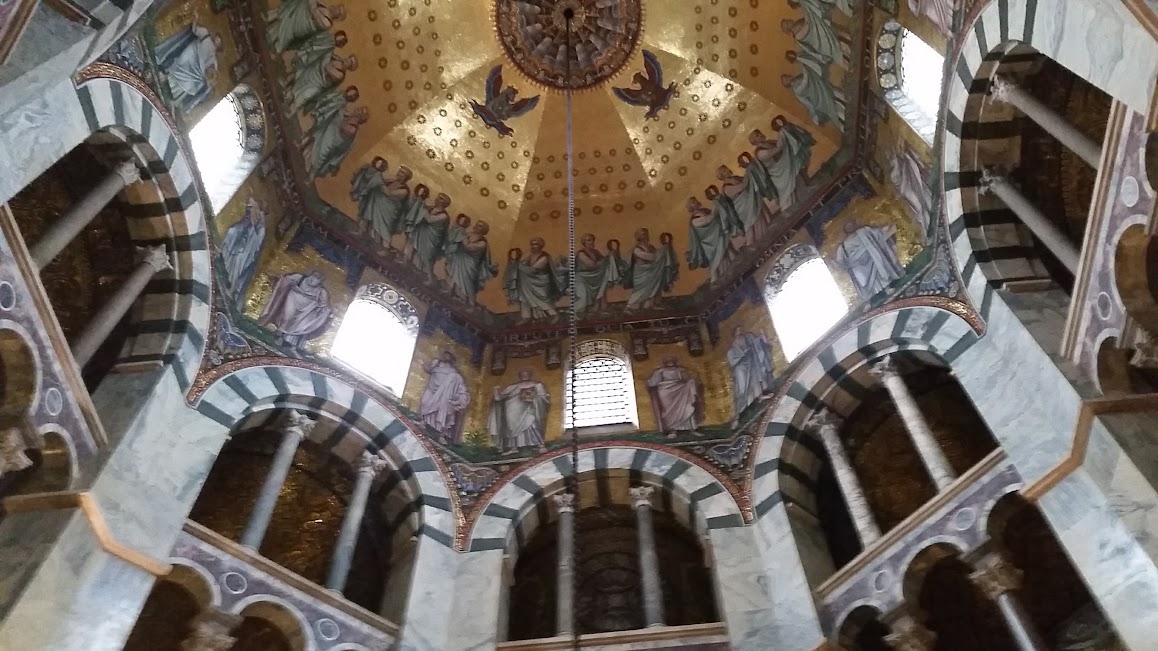 He promoted Christianity among pagan inhabitants; often at the point of the sword and established clerics and churches throughout the country. During his reign the Gregorian chant was popularized. He would also dictate sermons and topics to have discussed in churches throughout his kingdom.

He standardized taxes, built roads and bridges and had a library installed at his castle. He invited scholars to study there and share their wisdom with him, promoting learning, culture and the arts during a time referred to as the “Carolingian Renaissance.” 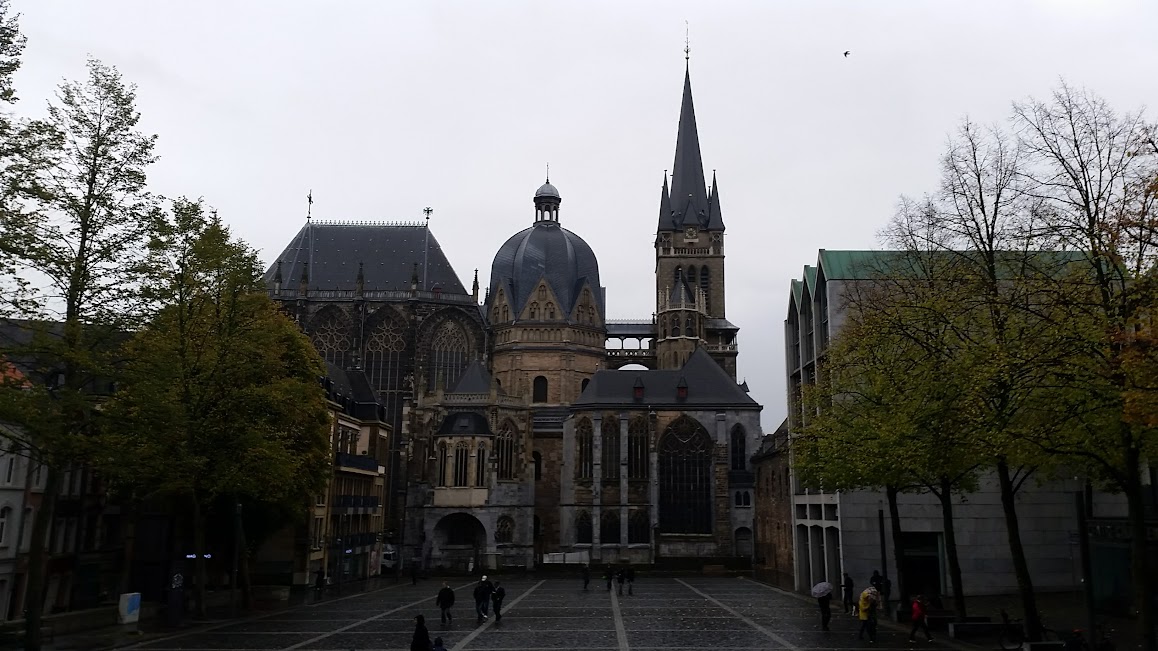 Charlemagne was tolerant and respectful of the Jewish people in his kingdom whom he considered economic and cultural assets; unusual in European history .  He had laws drawn up that protected them from excessive taxation by the church.

Downtown Aachen had a collection of shops with the king as a theme, one had him posed with a bag of their chocolate, it seemed a bit disrespectful to me.

No one does gingerbread like the Germans who invented it. Here’s a store window downtown filled with gingerbread hedgehogs and marzipan mushrooms.

Tim was collecting chocolate from every country we visited, Belgium was close by so we made a quick run to  Darci’s, a chocolate factory 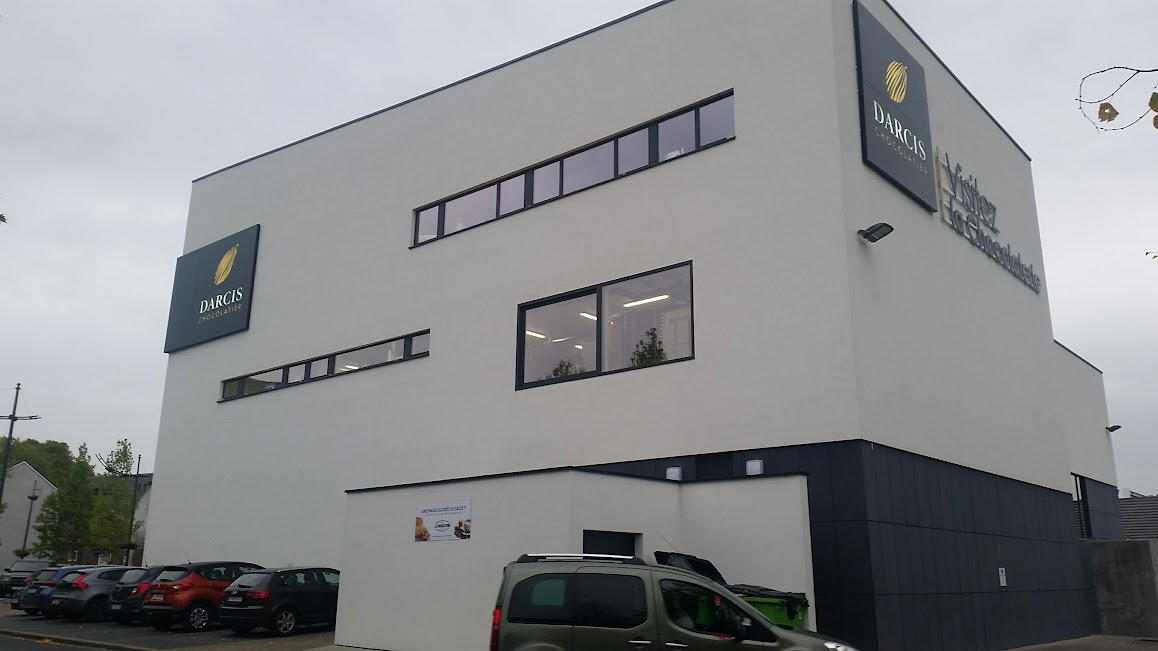 From Belgium, we headed back into Germany to our Airbnb.