Day 2 found us waking up in the luxuriously appointed home of our Airbnb hosts in the Model Farm neighborhood of Cork, Ireland. The lovely furnishings, beautiful back yard and gritty gravel road were so provincial and inspiring; its no wonder that farmhouse style is a perennial favorite. After a breakfast of musli and showers in a bathroom fancier than most we’ve experienced, we were off to visit Waterford to purchase a gift of crystal for M-I-L Joyce.

But first, a stop to shop for an Irish dolly requested by our little red-headed granddaughter Ellyza.

Still struggling to stay safe on the NARROW lanes and (to us) backward roads of Ireland, we found a toy shop, Smyth’s, in Cork. You could have pinched me to wake me up, I thought I was in a Toys R Us in the states.

We were greeted by towering rows of Disney, Fisher Price, Legos and other “American” brands. (I know Legos are Scandinavian, but they’ve been big in the U.S. since the 60’s). We looked at princesses and baby dolls, but none had the handmade Irish look and charm that we thought Elle would enjoy so we journeyed on to Waterford. 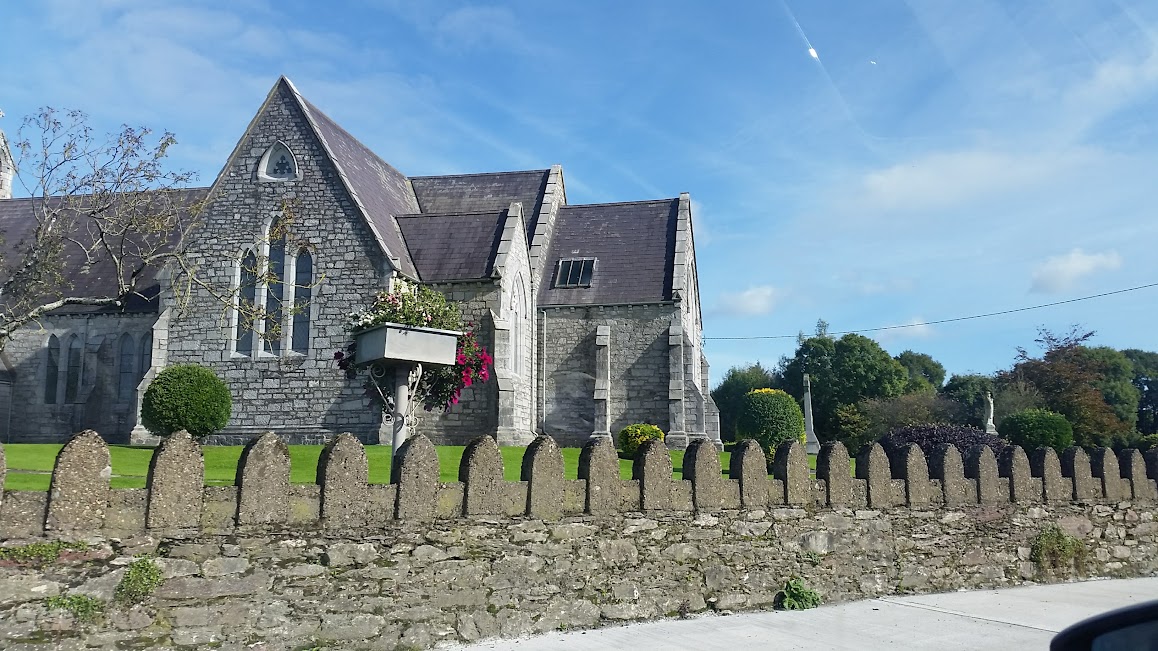 Entering Waterford, we found the downtown business district including Waterford Crystal Corporate headquarters and showrooms. Waterford is a name synonymous around the world with stunning Irish lead crystal. Newell’s mother had given us a very generous gift to help us “enjoy our trip to Europe” and he wanted to thank her by bringing back something he knew she would enjoy. He found a sparkling crystal pendant to hang in her window to release a prism of colors in the Florida sunshine. 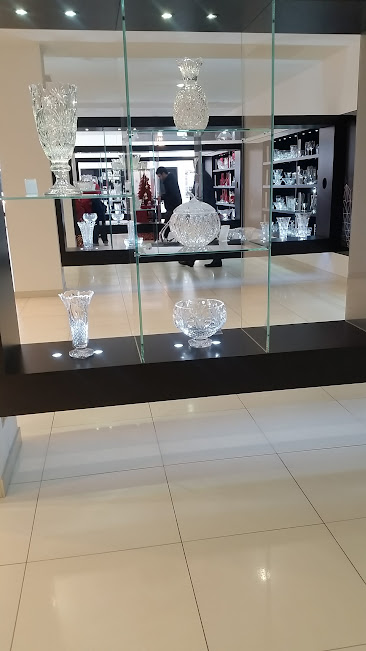 I looked at the gorgeous  (expensive) crystal pieces and wanted an ornament for our Christmas tree. I found a seahorse that I loved but discovered that it had been made in Slovakia or Slovenia; not the authenticity I was looking for. I found an embroidered shamrock at another shop instead.

After visiting several gift shops we finally located a little a red-headed, blue-eyed Irish lass to bring home to Ellyza, whom I think named her Bridget or Molly. And we found lunch at an Irish pub, oh my. Tim had a seafood pie with a mashed potato crust and a creamy seafood-filled sauce with crumb topping. Newell had Guinness stew and I enjoyed a wrap with authentic Irish (French fries) chips and malt vinegar. Ahhhh.

Next stop Kilkenny, one of Newell’s family heritage locations.

Newell and Tim opted to visit the castle of Kilkenny, but because of the climb in Blarney Castle the previous day, my foot was aching so I decided to explore the main block downtown. In a Dunnes store (much like a fancy Target), I found  a few Halloween decorations (how did it become such a big holiday in America and was just reawakening in the country of its origin?) Also some cosmetics and food for dinner; salads, yogurt, bread, toffee pudding and some soup we hoped to heat at the place we were staying. . It was lucky for me that I stayed behind, I avoided becoming one of the captives of Castle Kilkenny. 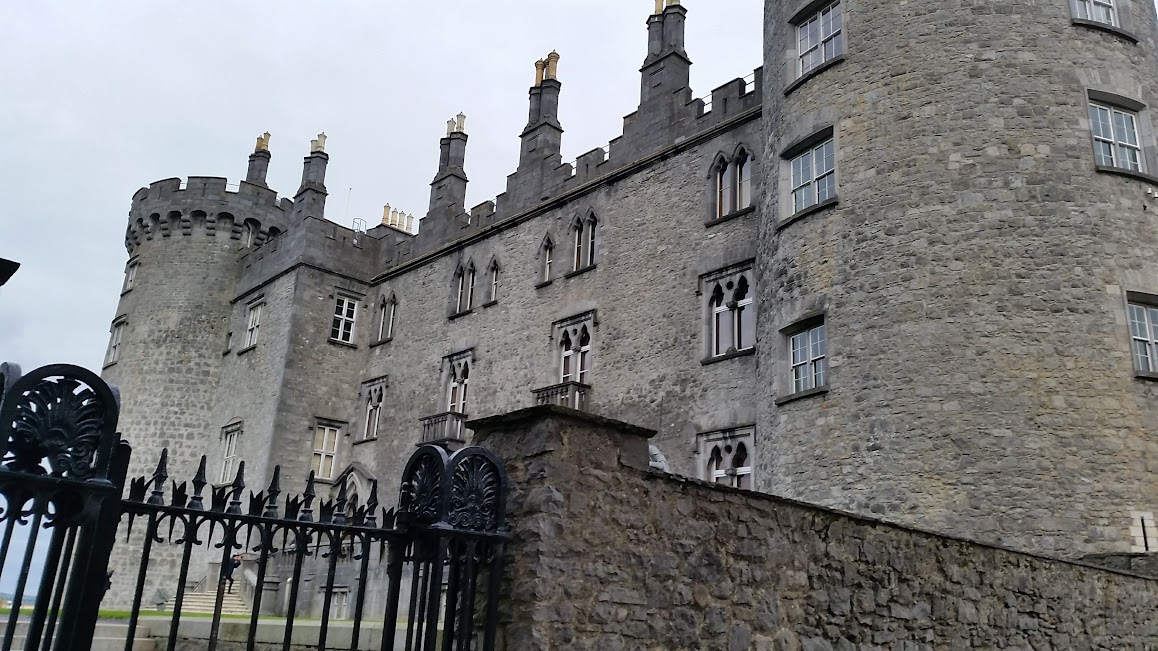 “After having a great time in Waterford and heading towards Dublin we saw a sign indicating Killkenny was not far away.  Having ancestors from County Killkenny and it wasn’t dark yet, we decided to go.

The town center was old, medieval with very narrow streets. Driving is difficult on the opposite side of the street than what you’re used to.  Add in the narrow streets with cars parked on both sides with barely enough space for one car to get through (yet it’s a two lane road.)  I didn’t get to see much, because I was so focused on driving.  When we found a place to park by a large department store I was ready to get out an explore.

Pam’s foot still hurt so she didn’t want to explore, but Tim and I wandered around city center heading towards the castle.  There were neat old churches, cobblestone streets, narrow alleyways you could only walk through and lots of people with interesting accents.

We got to the castle and checked, but we were too late to take a tour.  It was an interesting castle surrounded by a 12 foot stone wall and a very large lawn that lots of people were playing on or walking their dogs or just strolling around.  Here is what it looked like from the castle.  Notice all the people walking around and there are even more in the distance.  I thought it would be cool to take a picture from the hill you see it the distance. 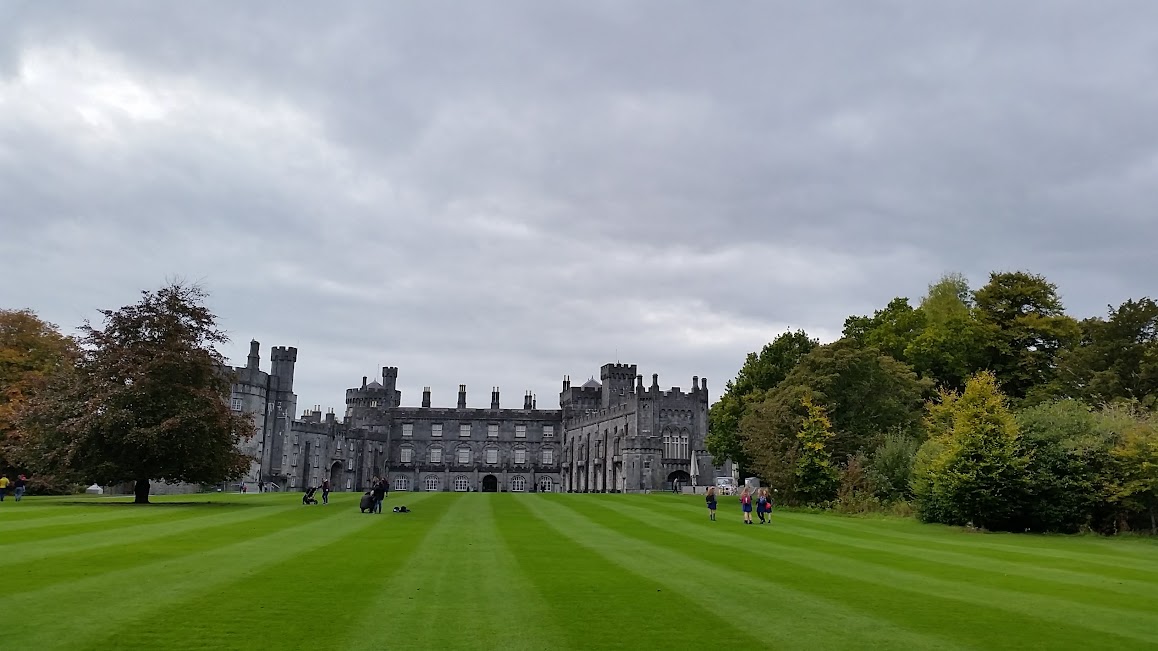 We got there and took a picture as most of the people were clearing out.  There was this one man in the yard…” here the story stops, I will add the basics and hope Newell will finish his narrative later.

Tim shares that they were about here when they heard a bell ring. Not knowing what it was for, they started for the castle to find out.

When they arrived, to their chagrin, they discovered that the bell signaled that the castle was closing and they were locked in! The beautiful 12 foot stone walls defied their attempts to exit. Finally they found a tree that they could climb up, then get on the wall and jump off the other side. Imagine their astonishment when they discovered they were in a private yard, also with a locked gate! Somehow they figured out an escape route and got out. And there I was blithely shopping and wondering what had taken them so long.

The only really bad experience we had with lodging was to present itself in Dublin.

I had reserved a suite through Orbitz in the city (the neighborhood photo should have been a warning.) I thought we could cook our dinner and the guys could go explore while I did laundry. When we arrived, there was no one to let us in. After several hours of calling Orbitz and talking to customer service reps in the Middle East (who kept hanging up on us)  someone found us a room at a different hotel.

Props to the gas station manager who let us stay in his market to use wifi calling long after closing time while we frantically searched for a place to stay that night. His Irish hospitality and generosity were much-appreciated; he wouldn’t lock up and go home until he knew we had a place to stay. He and his friends even called around to see if there were any vacancies nearby. We finally arrived at the hotel at 1 in the morning, there was no way to heat up the dinner we had bought for the night; we had to throw it away. We were tired hungry, hangry and ready for the few hours of sleep we could catch before we had to return the rental car and fly to Paris.