The Air France flight from Dublin was pleasant and polished. They served sandwiches and the airline messages were delivered in French and English. It was my first  experience outside of a primarily English-speaking country. There were no lines at the customs windows when we arrived mid-afternoon and the mod red and pink glossy decor of the airport restrooms looked like something out of a darling 60s  movie.

After that things became sketchy. The travel guides recommended groups take a taxi into Paris, costing about 70 euros. As we approached the airport exit to public transportation, a man came up to us and asked if we needed a ride into the city. He and Newell negotiated the price and we followed him to his late-model black car parked in an unregulated area of the parking lot. Tim rode in front and Newell and I were in the back. We gave him the address of the Airbnb in Paris which he programmed into the dashboard computer, and after speaking  French on a phone to whom we assumed was a dispatcher, we took off.

At about this time, Tim noticed that there was no meter in the car and became concerned about who the driver was and where he was taking us. He told us he as originally from Ghana and that he had moved to Paris to be near his mother. Newell kept him engaged in conversation as the commuter traffic into the city became thicker. We ended up being dropped off around the corner from the tall apartment building. We were not convinced that we had not narrowly avoided a human trafficking incident or some other danger.

We have since learned there is a private uber-type company in Paris, called Blacklane, and maybe this man was one of their drivers, but N and T  didn’t think so. I would get some identification and ask for a license before taking the offer of a ride into the city if I visit Paris again.

Our AirBnb was in a great downtown location, just a few blocks from Notre Dame Cathedral and the Louvre. It was in an old building undergoing renovation. The host spoke little English and we had a hard time getting into the locked building and finding the apartment on the 5th floor. The tiny elevator and the 3 of us with luggage meant we had to go up in shifts and the floors weren’t marked. We tried to get into the apartment and when we couldn’t find the key, we called and found out we were on the wrong floor. Finally we found the right unit and with great difficulty were able to use the old skeleton key to gain entrance. The studio apartment was small and unkempt; there was a tube of anti-fungal ointment near the tiny kitchen. After our late night in Dublin and unorthodox ride into the city our patience was starting to wear thin. We started a load of the laundry in the tiny washer, grabbed Bel Vitas, handfuls of mixed nuts and dried fruit and headed across the Seine to the Louvre.

The afternoon traffic in Paris was intense, sirens and crazy drivers were everywhere. Unknown to us, we had just missed Fashion Week which I’m sure was even more hectic and crowded.
The narrow streets encased by tall rows of buildings made negotiating our way to the river difficult. London presented a similar challenge, but at least we were finding directions in our native tongue. 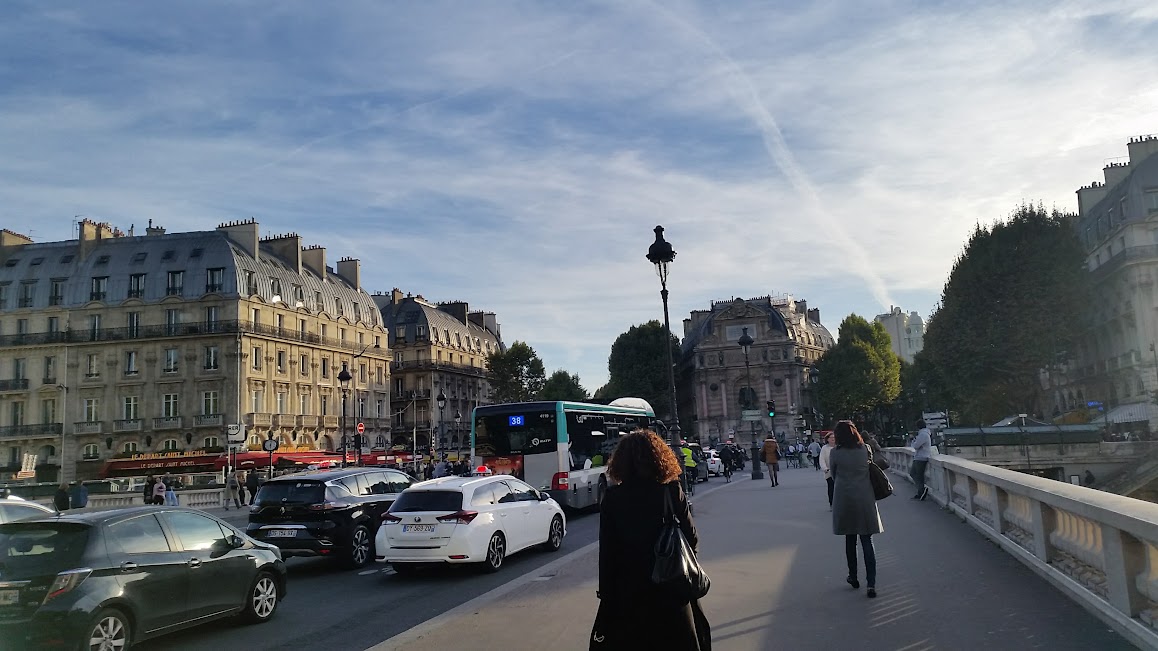 We had an ancestor who was the Mayor of Paris around 700 A.D.; an office that actually was close to kingship. Charles Martel was also a great warrior who fought the massive Saracen armies who were poised to overrun France, kill the inhabitants and eventually launch an assault against Rome to topple the Pope and Western Civilization.

The brief video linked to his name shows the importance of the Battle of Tours  or Potiers and how he and his men saved the culture of Christianity and Western Europe. He became known as “The Hammer.” His grandson Charlemagne or Charles the Great would become the first “Emperor of the Holy Roman Empire;” we would see his throne in Aachen, Germany in a few days. 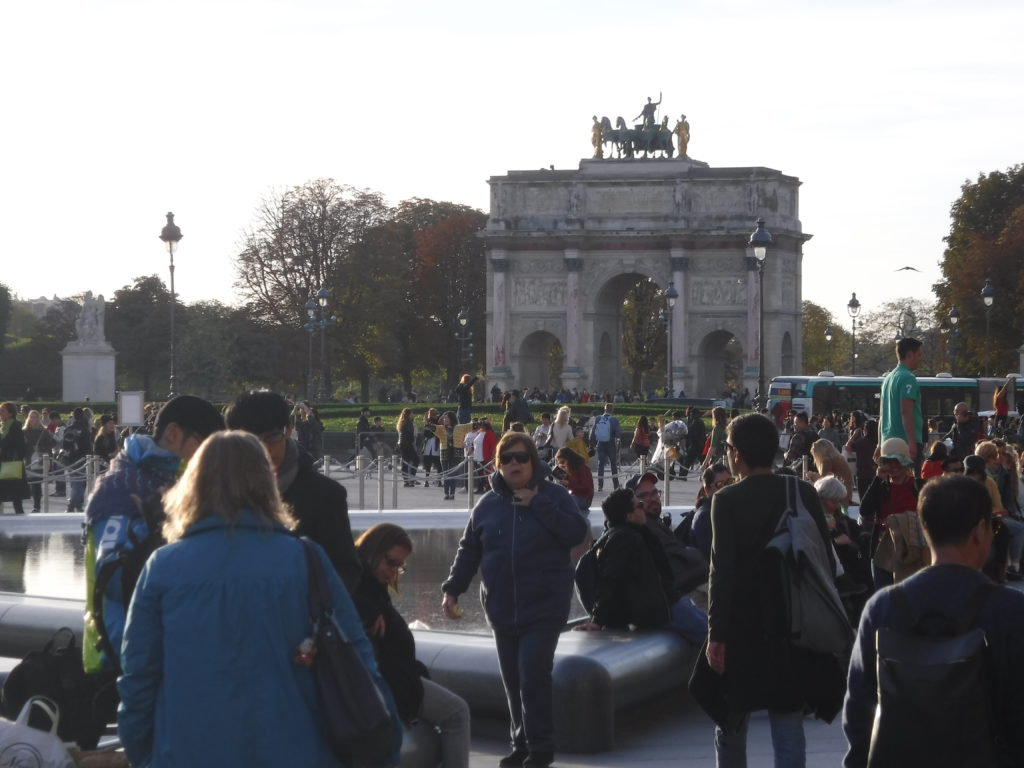 We didn’t have time to explore Notre Dame, but the Louvre is open until 10 p.m. on Wednesdays. The website says admission is free;  but if you want to see the more important exhibits you have to buy tickets (no way were we going to travel all the way to Paris and not see the Mona Lisa; we bought tickets – they count on that mindset.)

After the terror attacks the area was heavily guarded by serious-looking soldiers dressed in black and carrying large automatic weapons, unfortunately a common site at the most-visited European landmarks.

I’m not sure what I was expecting of the Louvre, it is so iconic and important in the world of art and antiquities, but honestly, I was a bit underwhelmed. It seemed sort of sterile and the rich history I had hoped to experience was there but not presented in an interesting and vibrant way.

After we entered and purchased tickets we made our way to the Mona Lisa; making sure that if the museum closed we would not miss this important exhibition. 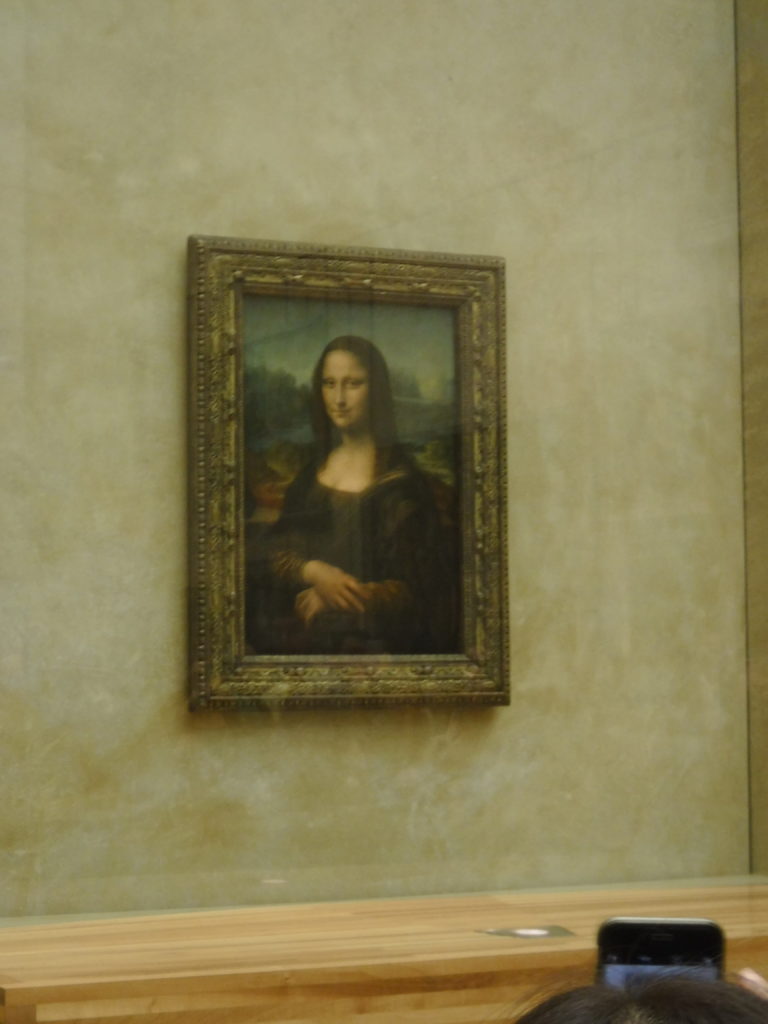 Even though I’m an artist, I do not appreciate public displays of nudity;  I referred  to it as academic pornography when I was in college. There was a plethora. Here are a few paintings that were not suggestive. 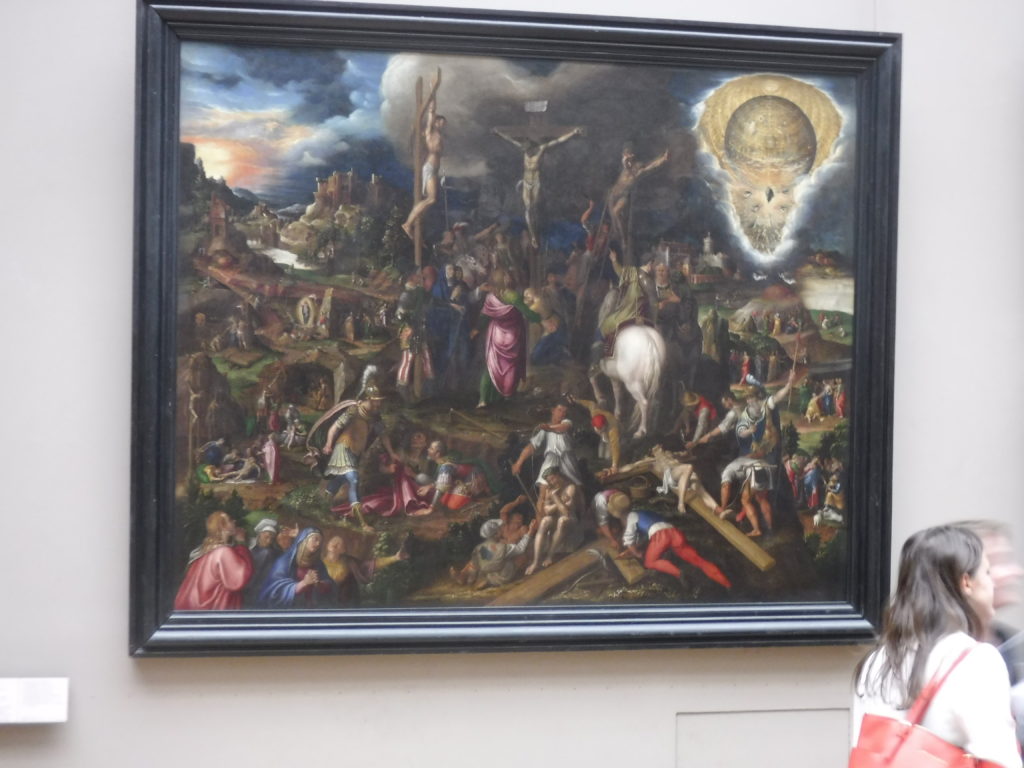 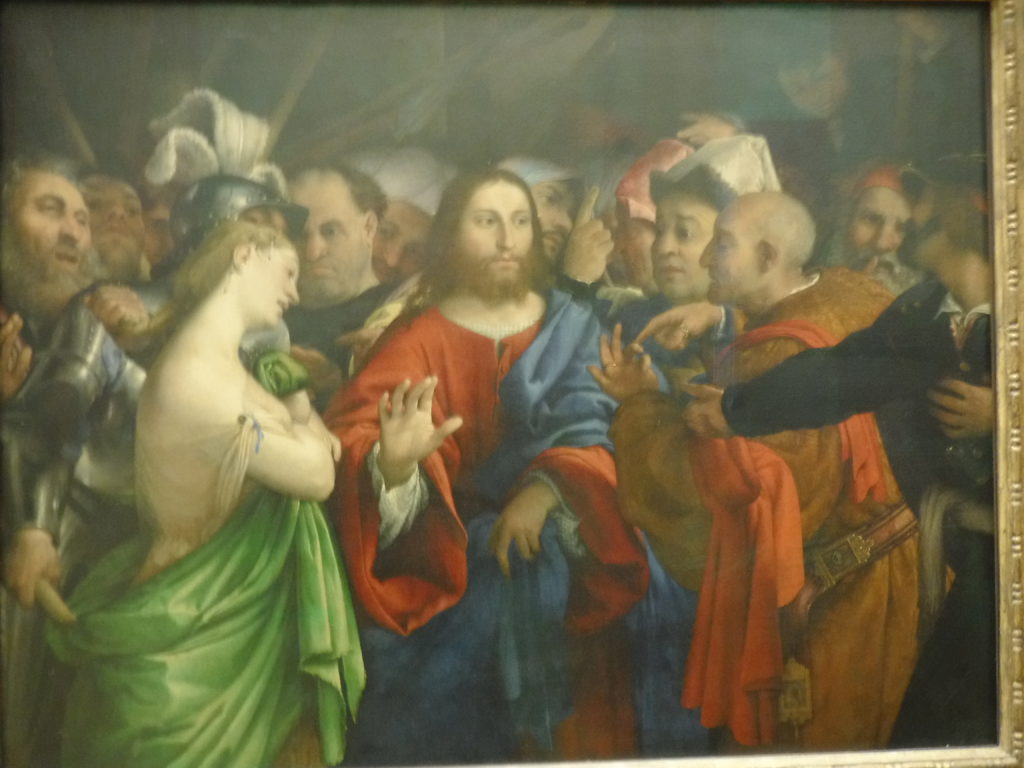 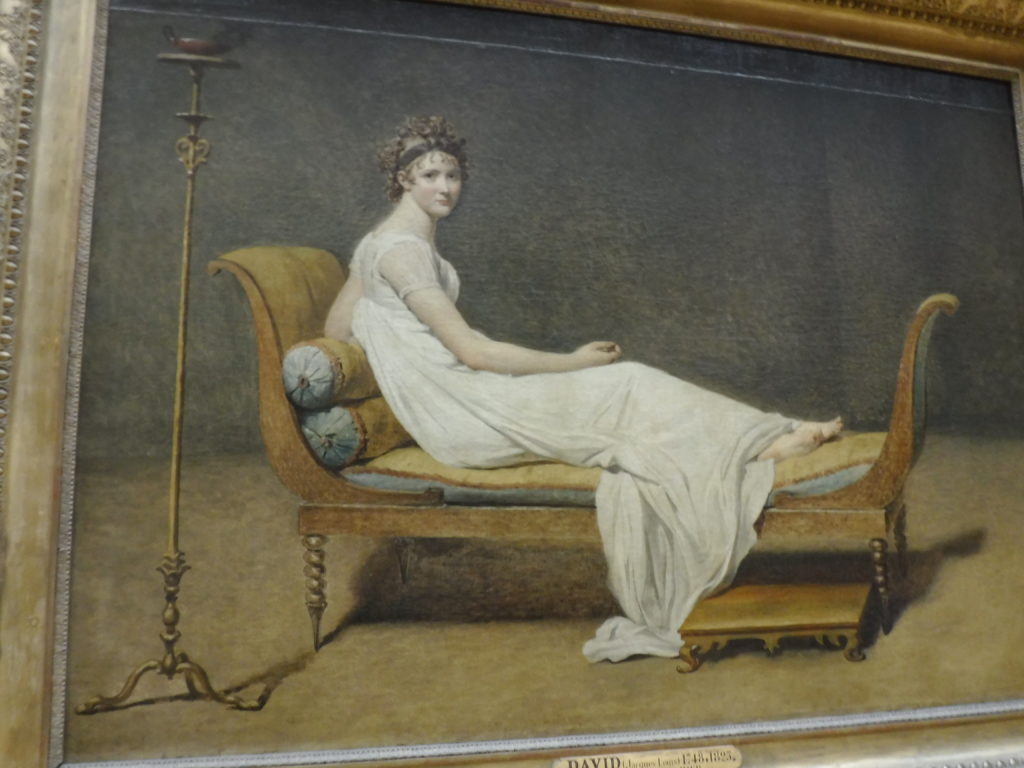 Everywhere we looked there were superstars of the canon of Western art including: Winged Victory and the Venus de Milo.

The Louvre also contained a lot of religious art, many paintings that I have seen in Christian publications and many  altarpieces. 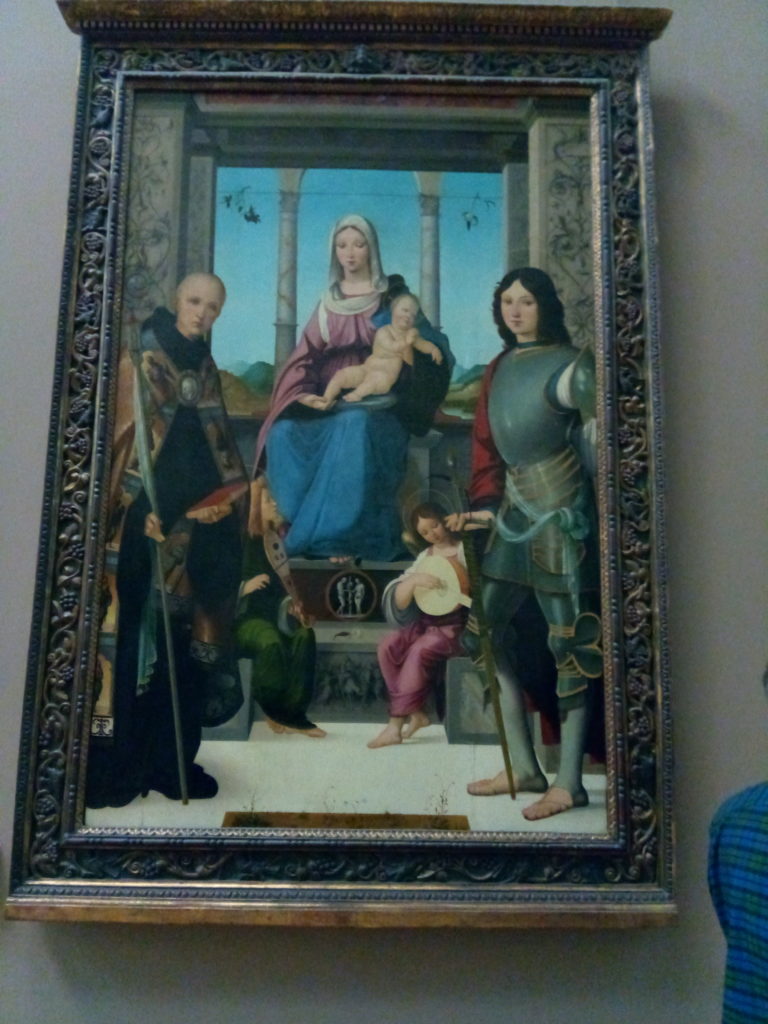 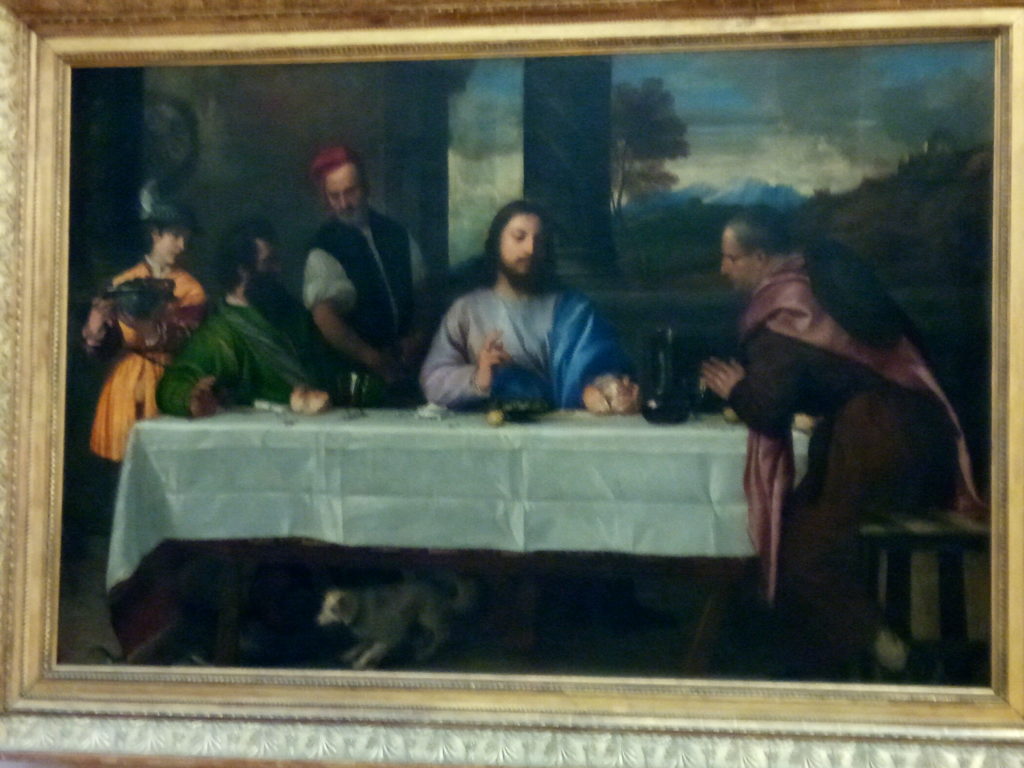 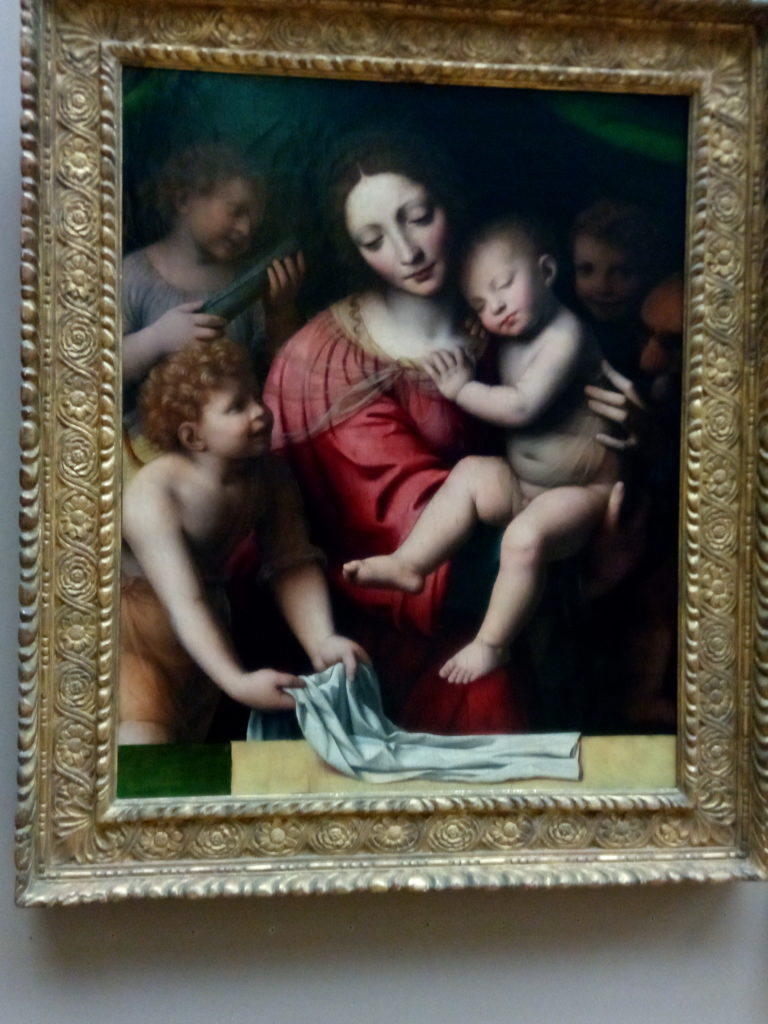 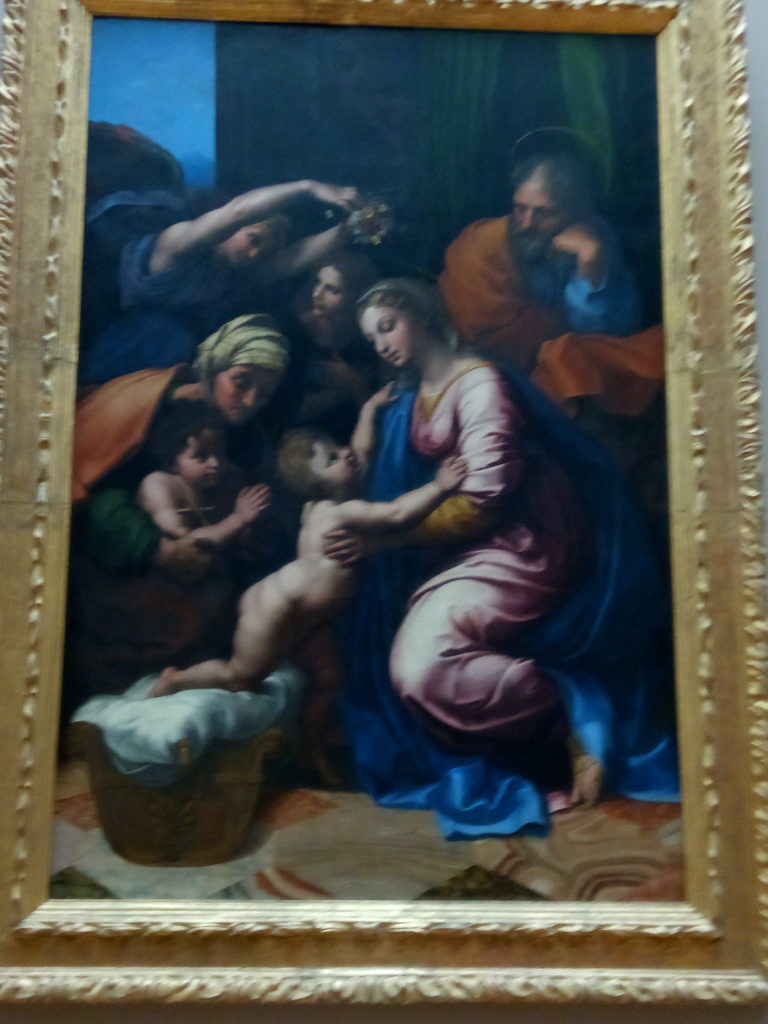 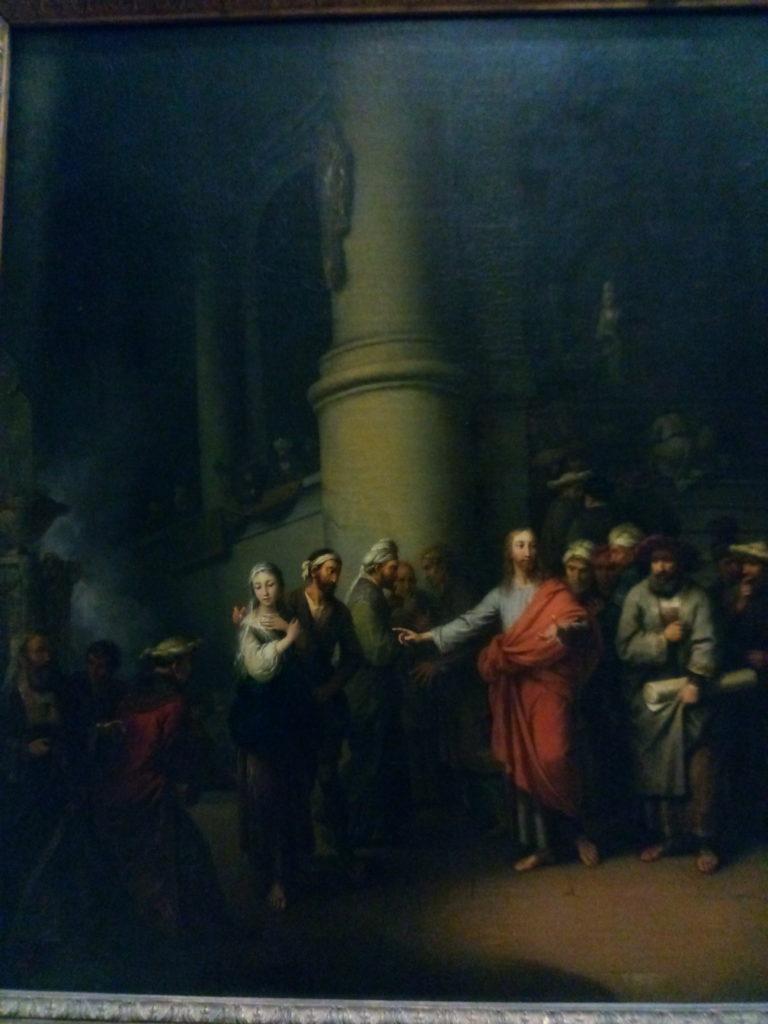 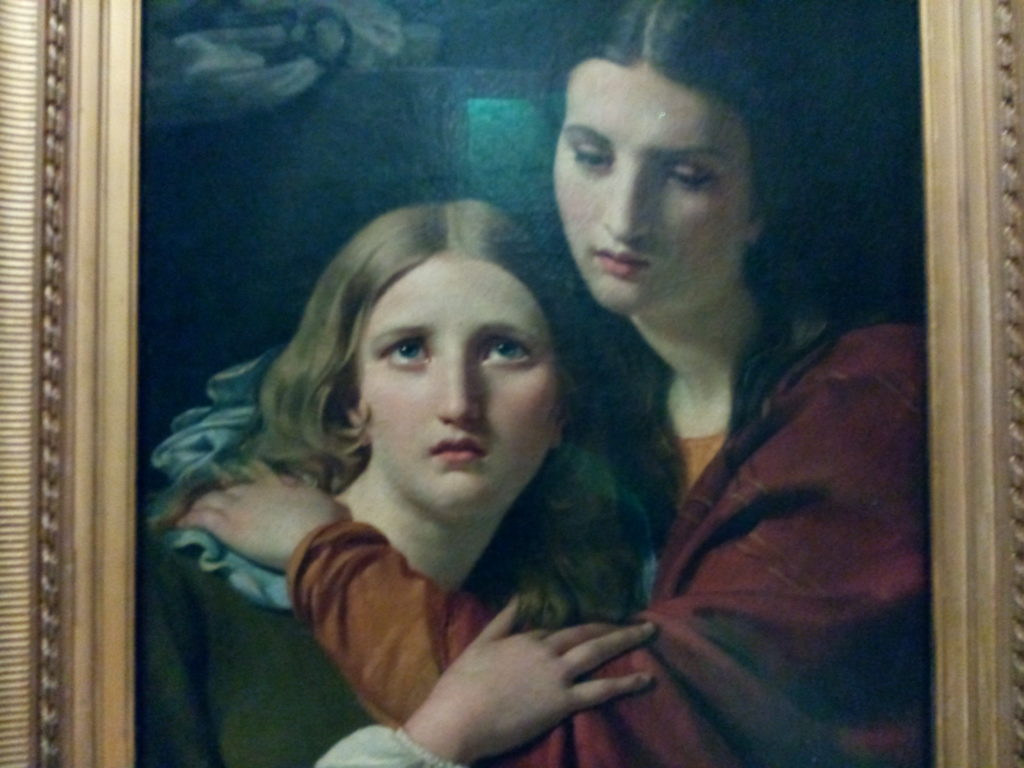 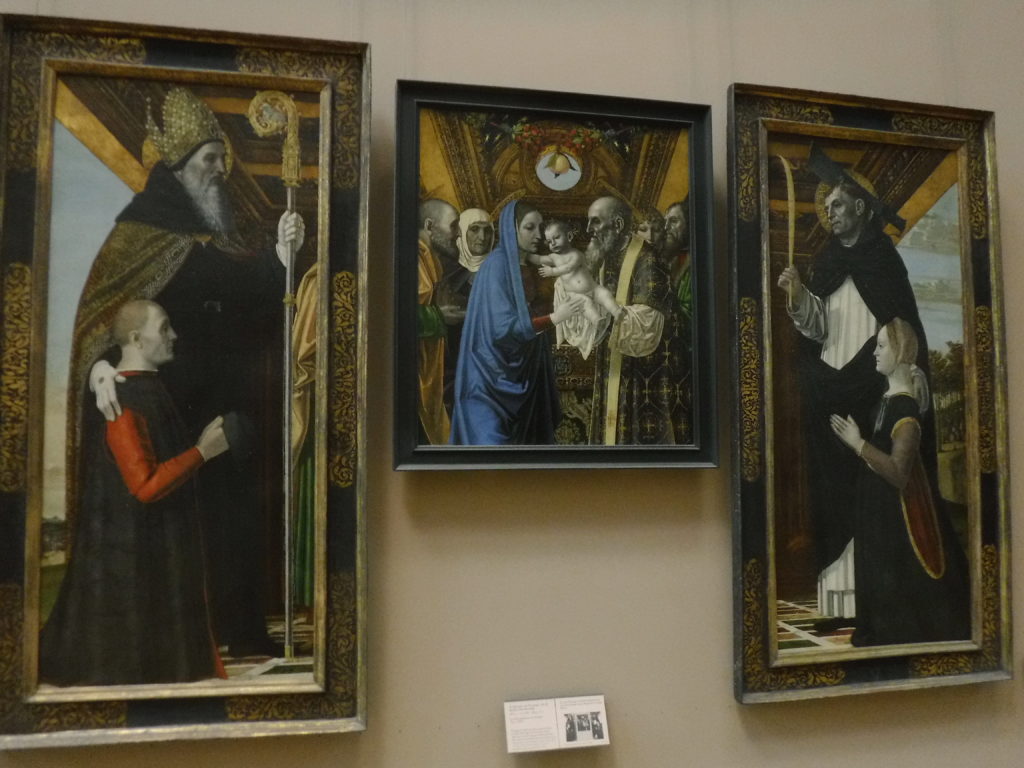 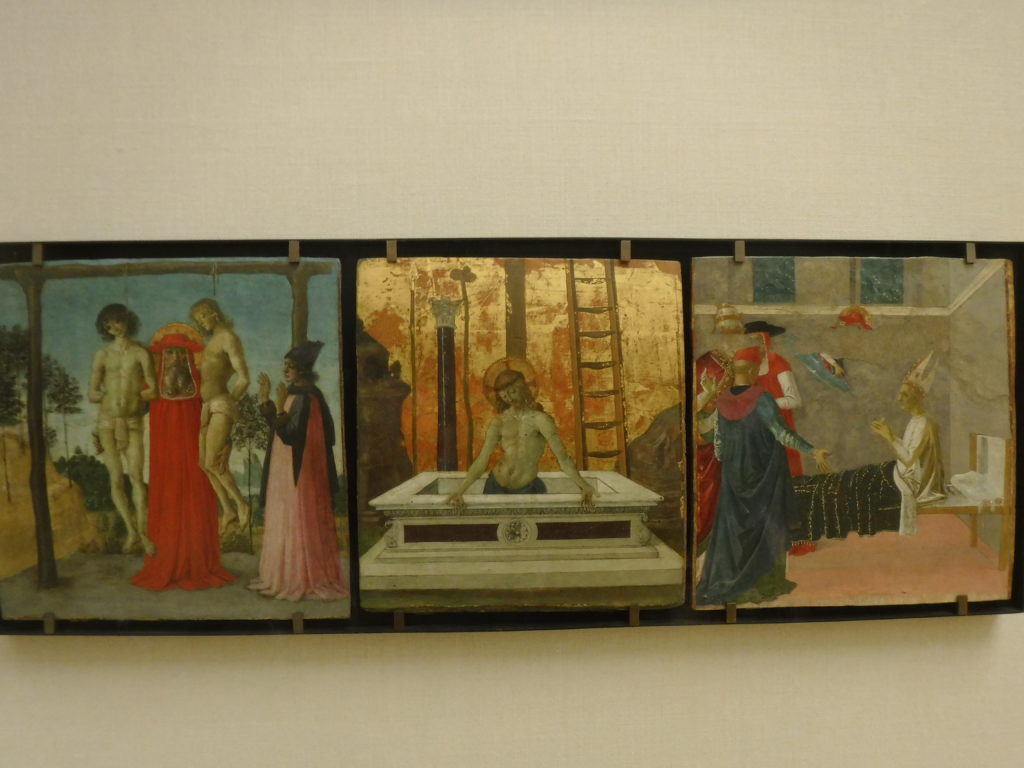 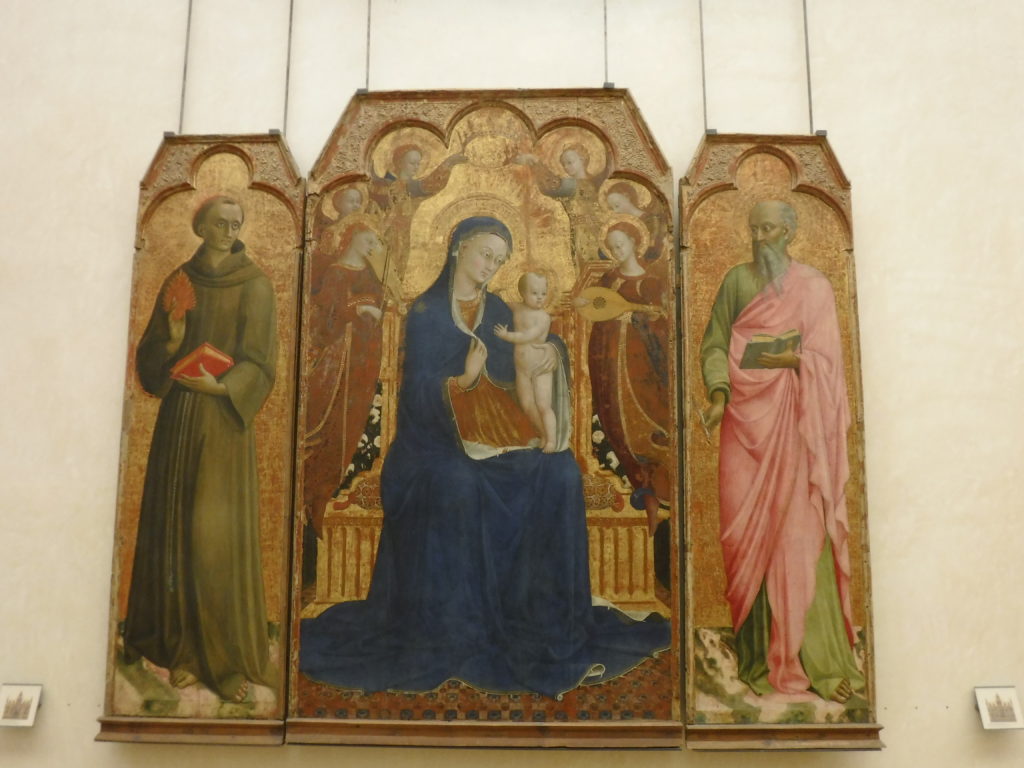 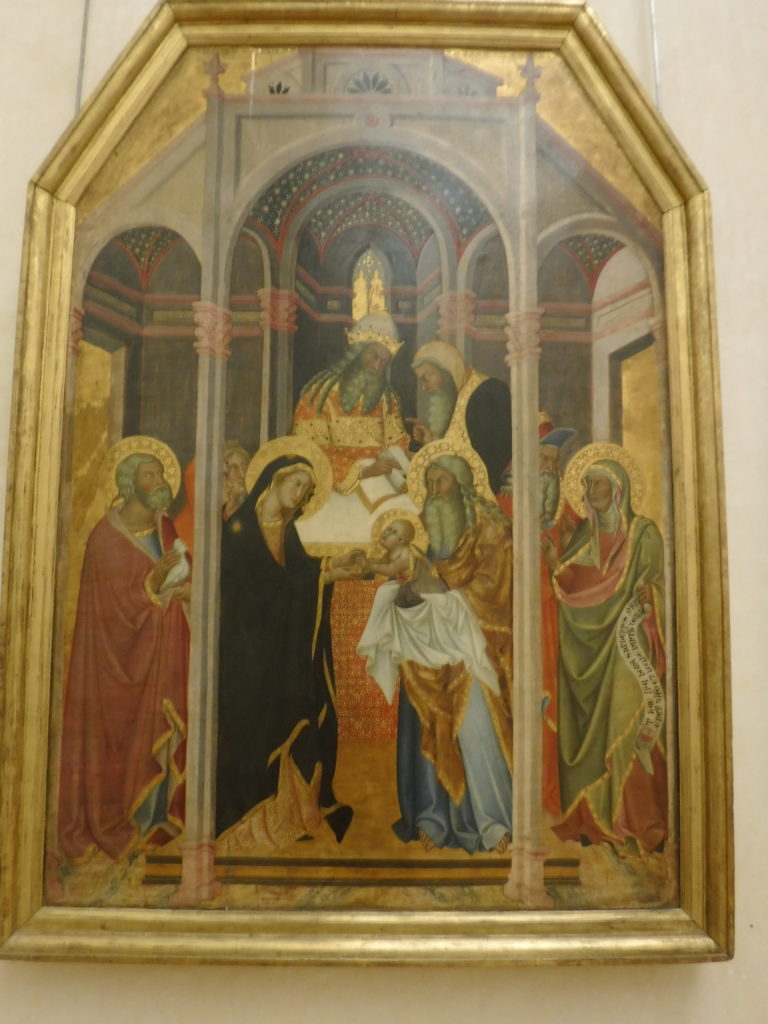 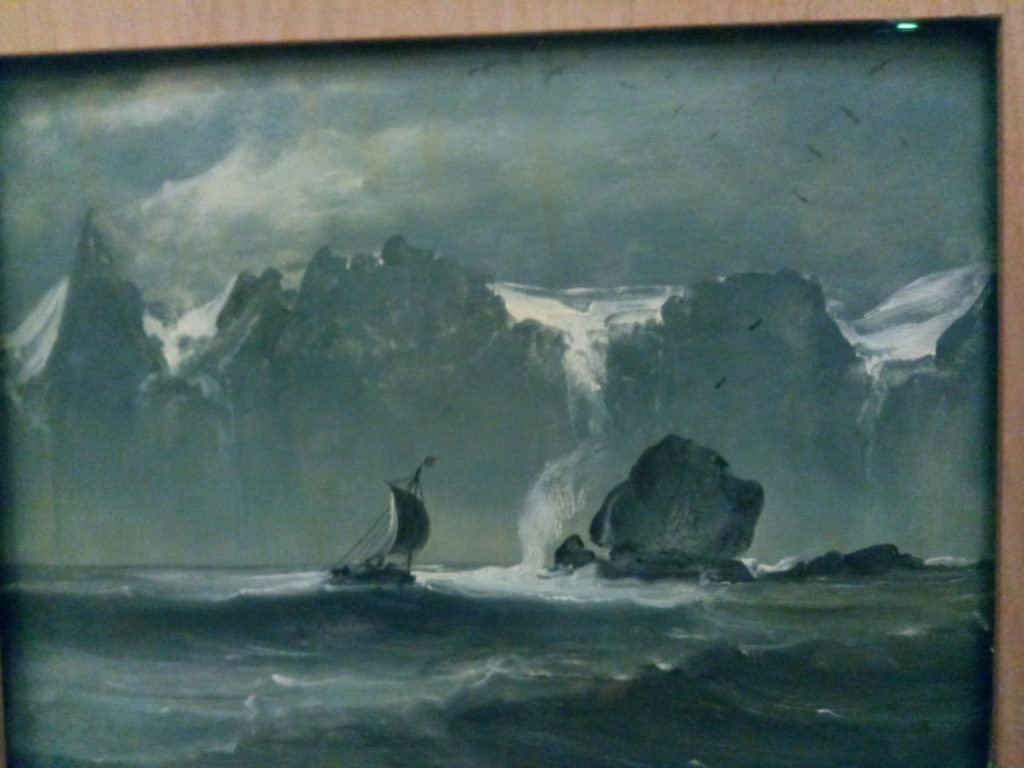 In line at the concessions, we saw a mouse dart out of the kitchen and because it was late, were only able to get a couple of bottled orange juices, for which we were grateful. 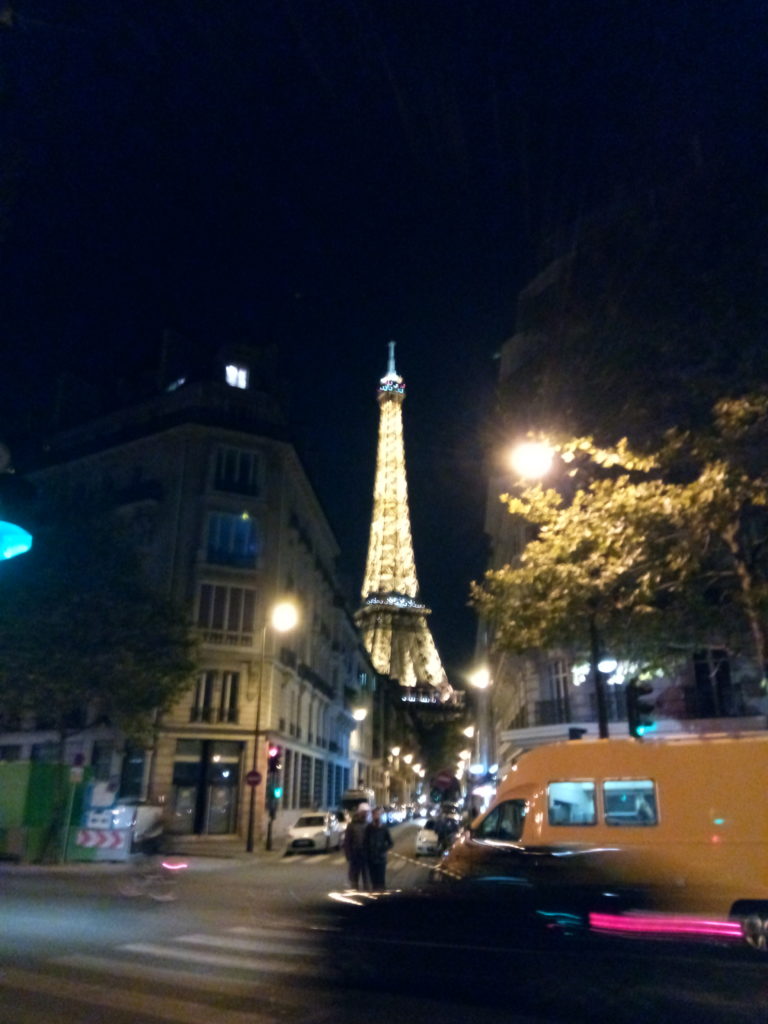 We left the Louvre right before closing time; Tim wanted to walk over to the Eiffel Tower; it was farther than we thought. We arrived after 11:00 p.m. just after the sparkling lights were turned off. It truly was a beautiful sight. Once we waded past the souviner hawkers we marveled at the architecture and scale of the tower. 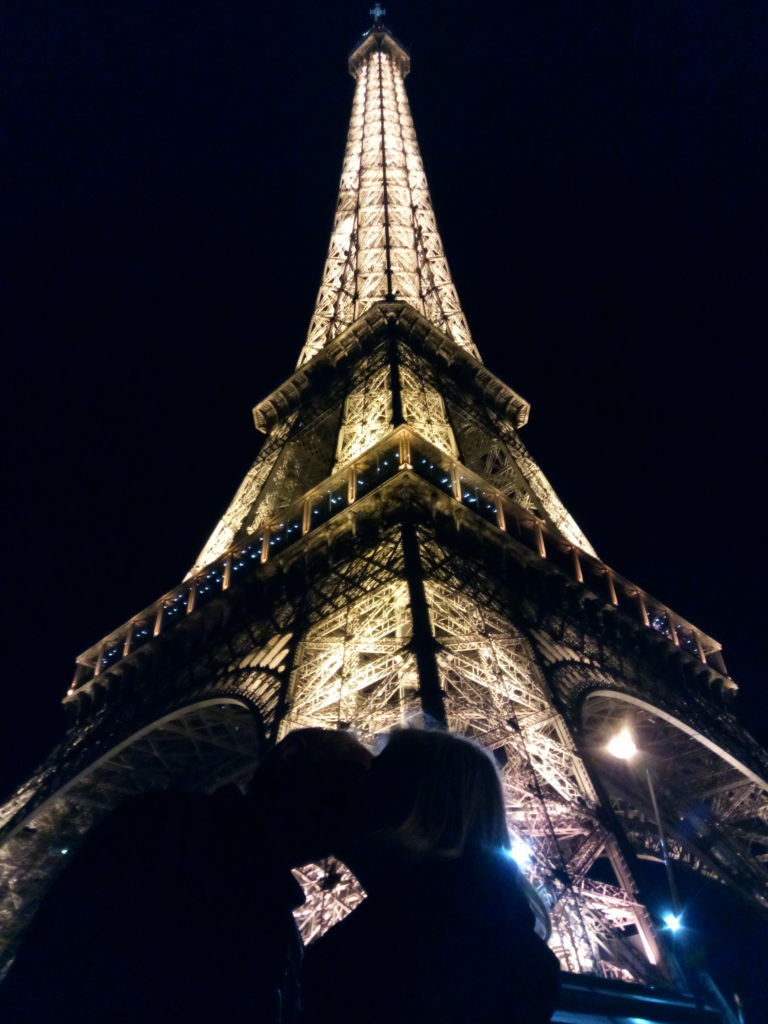 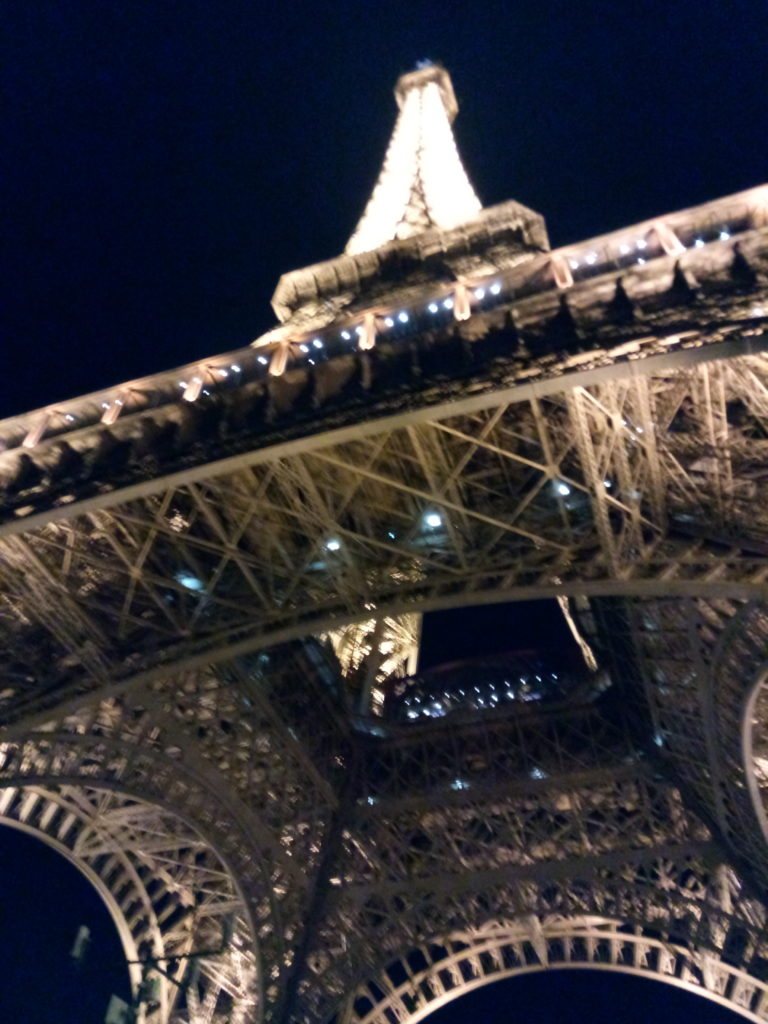 And we are finished for the day. Tomorrow we’ll have a quick look around, seek a few more souviners (Ashlyn asked for something from Paris) and find some legendary pastries; yes, I believe they are the best in the world. 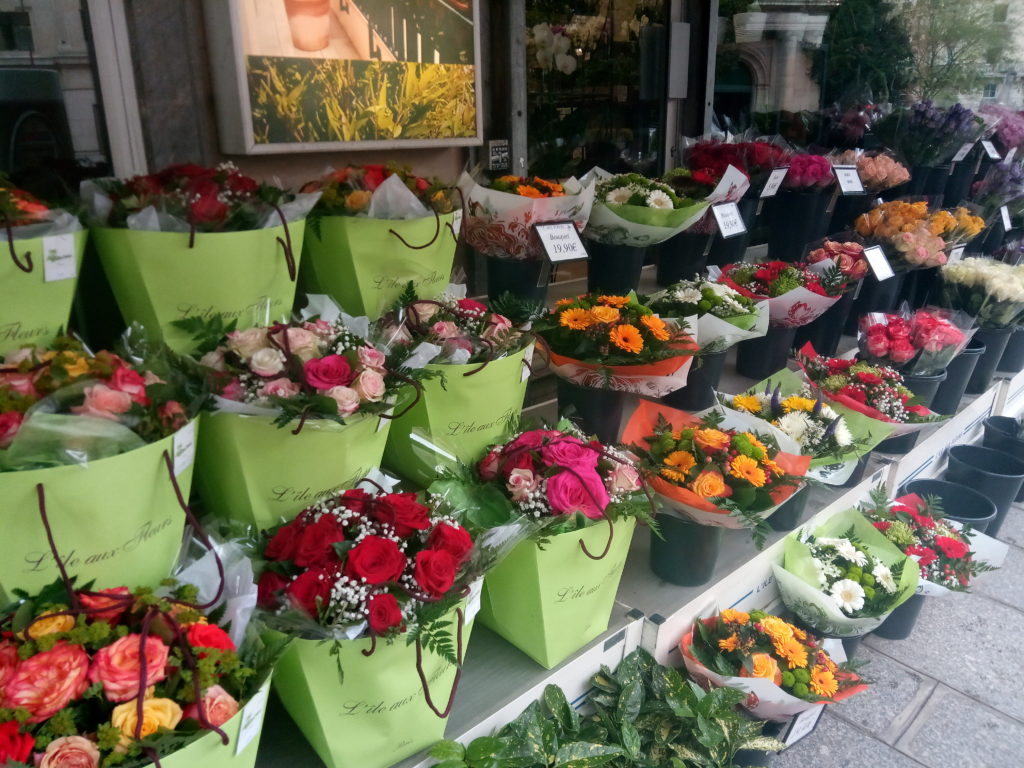 Paris in the morning was more charming. 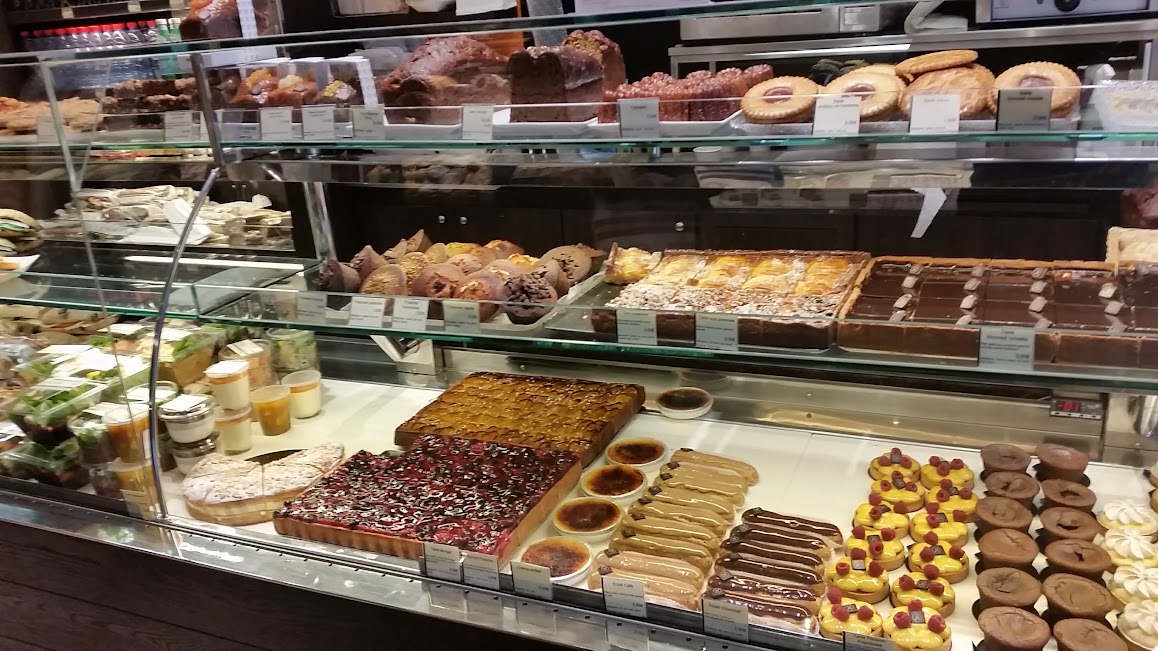 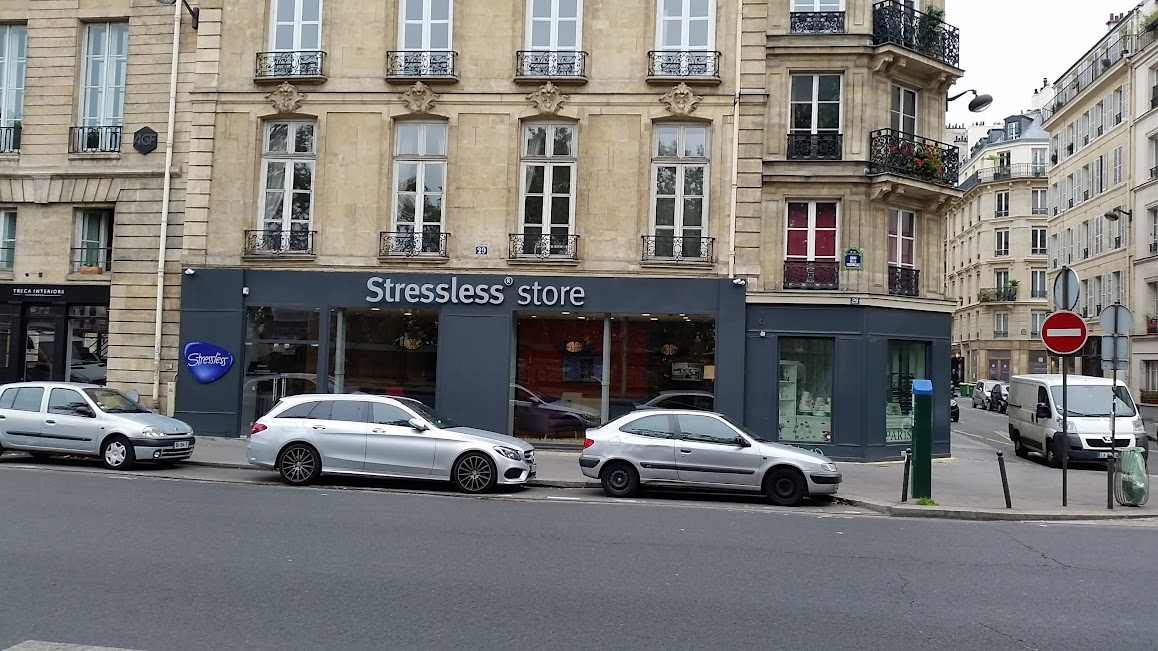 We found a cafe serving breakfast and ordered modest dishes, the food was ok but not as good as we expected. At the end, the owner charged us an additional 15 euros for service on a bill that was only about 20 euros. Americans beware – Paris is a giant money pit. But with the help of online searches we found a store that sells scarves and another where we bought a hot pink Eiffel Tower for Ashlyn and an Eiffel Tower snow globe for Ashley’s collection.

We weren’t in the city long enough to discover the more charming or scenic neighborhoods, which would have been nice, but we had reservations for an Airbnb near Mont St. Michel and so we rented a car (which also had additional fees that were not expected on the reservation) and we were off to the country.