As much as we enjoyed exploring London, it was time to move on to visit the homes of 2 favorite literary superstars; William Shakespeare and Beatrix Potter (author and illustrator of Peter Rabbit) with a stop at Oxford University.

Oxford is conveniently located about halfway between London and Stratford; we chose to take the train. And here I err, Oxford was the home of 2 more of our favorite literary superstars: C.S. Lewis (Christian apologist and author of The Chronicles of Narnia) and and J.R.R. Tolkein (The Hobbit and Lord of the Rings trilogy.) Both men were professors at Oxford; friends and rivals. Because of Tolkein’s influence, Lewis converted to Christianity; Anglican, not Catholicism, disappointing Tolkein. Here is a wonderful blog post by Ethan Gilsdorf that shares more depth and information  about their relationship and experiences:  http://www.literarytraveler.com/articles/tolkien_lewis_england/

We saw enough of the town and campus to get a taste of the local flavor. 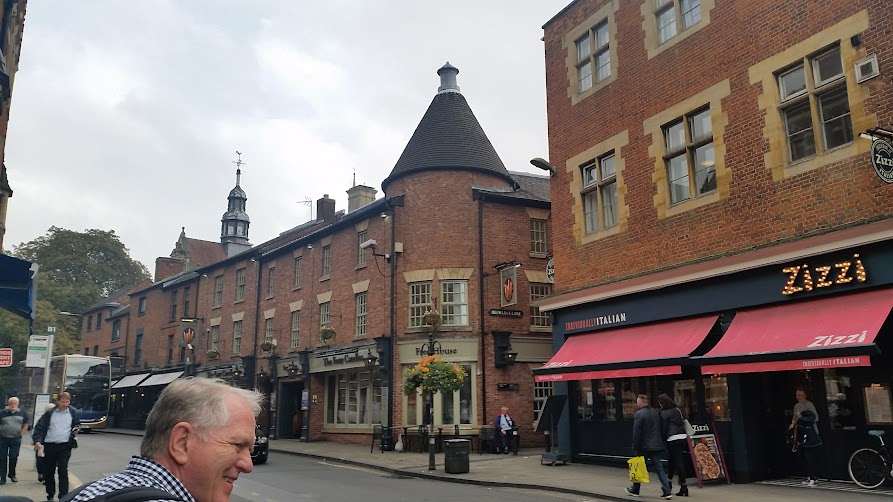 Oxford is, not surprisingly, a college town. Despite its illustrious reputation and history, it is a very-daily sort of place with lots of bicycles, fast food and college gear shops. 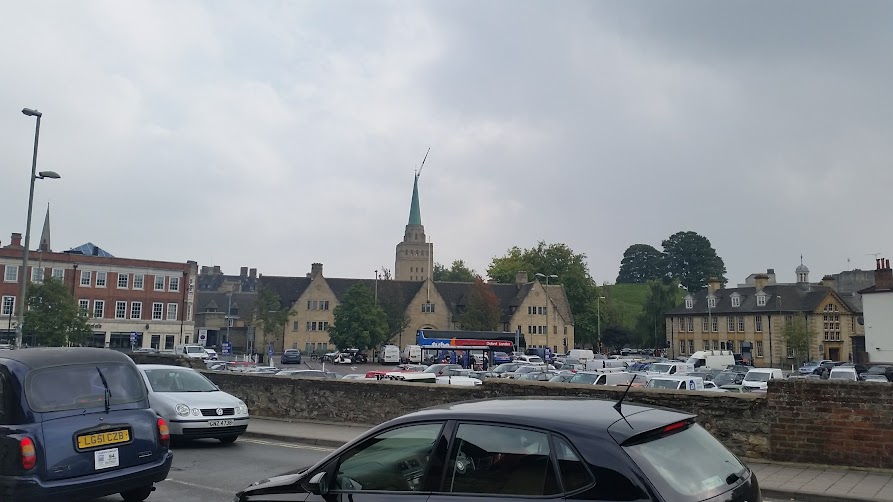 Oxford University is made up of a town-wide collection of colleges, unlike most U.S. universities that have large sprawling campuses. 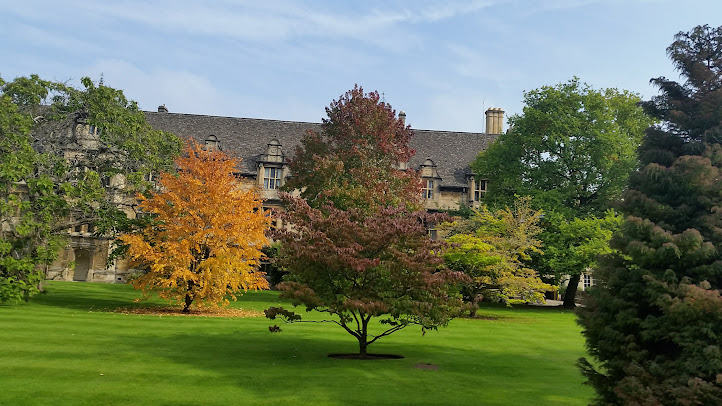 After visiting an art and craft store to pick up needle and thread for a wardrobe repair and a tiny wooden stamp for baked goodie labels, we dashed back to the train heading for Stratford-upon-Avon.

It was raining when we arrived; it looked like the Tudor-era town we were expecting to see. Except for paved streets, I imagine this is not too different from the neighborhoods young William Shakespeare passed on his way to school around 1575.

After walking about a mile through the rain to get to our Airbnb, we found out that a roof problem would force us to go to another location (we had to pay the taxi) which turned out ok. We were housed in an old (really old) inn that served the traditional English breakfast we were looking forward to. 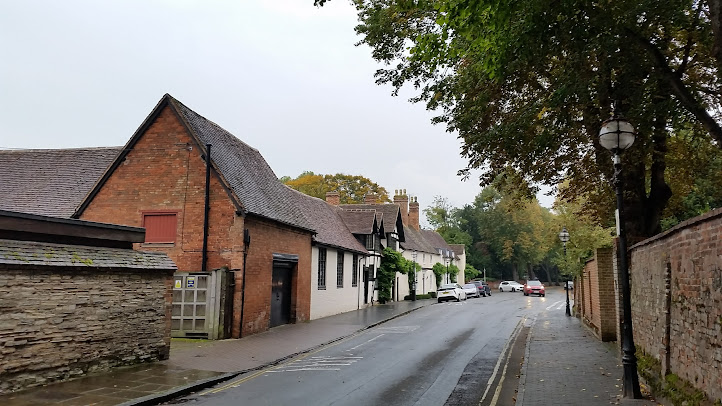 The animated owner Pascal, showed us the map and marked the most popular tourist sites. He recommended a couple of pubs that served dinner and we took off to find the Holy Trinity Church were Shakespeare was baptized and buried.

I love old places, including houses, castles, churches and graveyards. The oldest English graveyard in America that I’ve seen was in Jamestown ca. early 1600s. Here was a church built in the 1200s with tombstones so old the names and dates were worn away.

The land was granted for building a town of 20 families  in 714 A.D. by the Saxon king. About a century and a half later a church was erected by the river. The chapel has a long and tumultuous history, here is a chronology from the church’s website: http://www.stratford-upon-avon.org/history-overview

This was originally Roman Catholic but when King Henry VIII left the church and started the Anglican Church, all church properties in England were confiscated and given to the Church of England.

The tomb of the Bard. His wife Anne is buried nearby, as is his daughter Susanna.

A side view of the Royal Shakespeare theater in Stratford where Shakespeare’s plays are performed.

In America we have food trucks, on the river in Stratford, food barges.

After a walking tour of the town, we found an old pub that claims to be the oldest building in town, The Garrick, open for dinner.  It is thought to have been built in 1596 with parts of the building dating back to the 1300s. In America this might have been the oldest English building in the country, but here, just another old pub.

I tried another round of fish and chips with a salad garnish and mushy peas ( the f&c in London were better), but the atmosphere of a really old building is quaint and a little eerie. An outbreak of the plague is said to have started here in 1564 with the death of Oliver Gunn. Supposedly haunted, we didn’t see any ghosts and we did wash our hands. 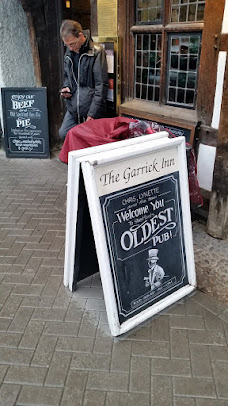 After a short walk we returned to the Bed and Breakfast, it was dark and eerie but still no ghosts. And when the sun rose we were treated to the classic traditional English breakfast in a communal dining room with tables set with real dishes and white linen tablecloths.

Now we catch the train to take us to Peter Rabbit’s birthplace.