With apologies to Mark Twain for appropriating and misquoting his title, we are prepared to tell the tale of travel, exploration and discovery from our first collective journey overseas. The three-part mission of our adventure was, in addition to boldly going where no Layton McMurtry had gone before…

Our whirlwind journey would take us through 6 countries: England, Scotland, Ireland, France, Germany and Italy and last 4 weeks.  We invited our youngest son Tim to accompany us which worked out well as he was taking the semester off from his university studies to fine-tune career goals. He paid his own way and besides having a “great and intelligent sense of humor” (2nd grade teacher), he brought along amazing GPS and navigational skills, a set of well-toned muscles, Krav Maga  and some basic French and Italian phrases.

The voyage began on the night of Friday, September 22, 2017 at the Salt Lake City International Airport. We boarded a Delta non-stop flight from SLC to London and took off into the sky at 8:30 p.m. I, Pam, had never left the United States before, except for a brief bakery run in junior high to Tecate, Mexico. I was both thrilled and terrified, imagining pickpockets and scandalous characters around every corner (thankfully not the case.) At the end of our travelogue we will include travel and safety tips, the preparations we made and things we would have done differently. 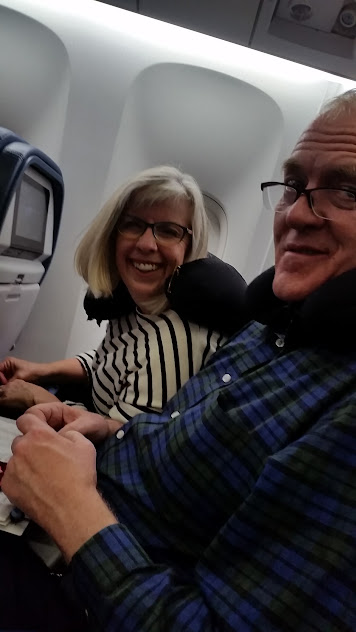 Friend Wendy Bohman volunteered to drive Tim and me to the airport, Newell would take Trax from the U of U Hospital and meet us there. I had never flown anywhere for 10 1/2 hours, tummy was a little upset but Delta served a nice little meal which was appreciated.

and after reading airline blanket horror stories, I took a flannel throw which was comforting when the proximity to the window and hull proved a bit chilly.

vitamins, meds, sleep aids, pain relievers ( you don’t want to be in a foreign pharmacy trying to figure out what brand approximates the results you are accustumed to .)

We brought black-out eye masks and ear buds, which we found out later the airline supplies all passengers (ours were a better quality though.) We had combination locks on all of our luggage and Tim kept one on the backpack he carried everywhere. Delta was an amazing host offering drinks and snacks every 1 1/2 – 2 hours. The selection of in-flight movies and games was good and the flight tracker showed us the location of the plane and travel time, a nice way to stay informed, with USB ports for recharging our phones overnight (note – bring your own cables.)  We wiped down our trays, armrests and other areas with disposable disinfectant wipes, took Airborne and Emergence-C and drifted off into something of a rest (after I finally got to watch Wonder Woman – missed it this summer.)

Saturday Delta served breakfast and lunch so we were never hungry (or irritable). It was a good flight and we arrived at Heathrow Airport at 1:30 p.m. local time. *Note – use the airplane restroom before the end of the flight and disembarking, there may or may not be a restroom opportunity before getting to the customs line. A LLLONNGG line on the weekend, it seemed like every traveler in London was there ahead of us.

We were interrogated – how long would we be in England, what was our purpose for being there, where were we staying? Finally we got our first passport stamp and a cheery hope for a good “holiday.” It was nice that our first out-of-country destination was English-speaking – somewhat easing the culture shock.

Heathrow is not in the middle of London – we opted to take the Heathrow Express train to get to the Paddington Station (yes, that Paddington) which was near our Airbnb. We intended to walk as much as possible, for many reasons (VERY IMPORTANT NOTE: wear sturdy flat shoes. I had new comfy travel clogs that were great on the plane and nearly disabling when I rolled my foot on the uneven sidewalk and cobblestones. A month later I am still hobbling around waiting for my foot to heal.) We ended up taking the underground trains more than anticipated and became pros – Mind the gap!

I immediately fell in live with London – I knew I would.  The September air was warm and humid, reminding me of Orange County, CA. 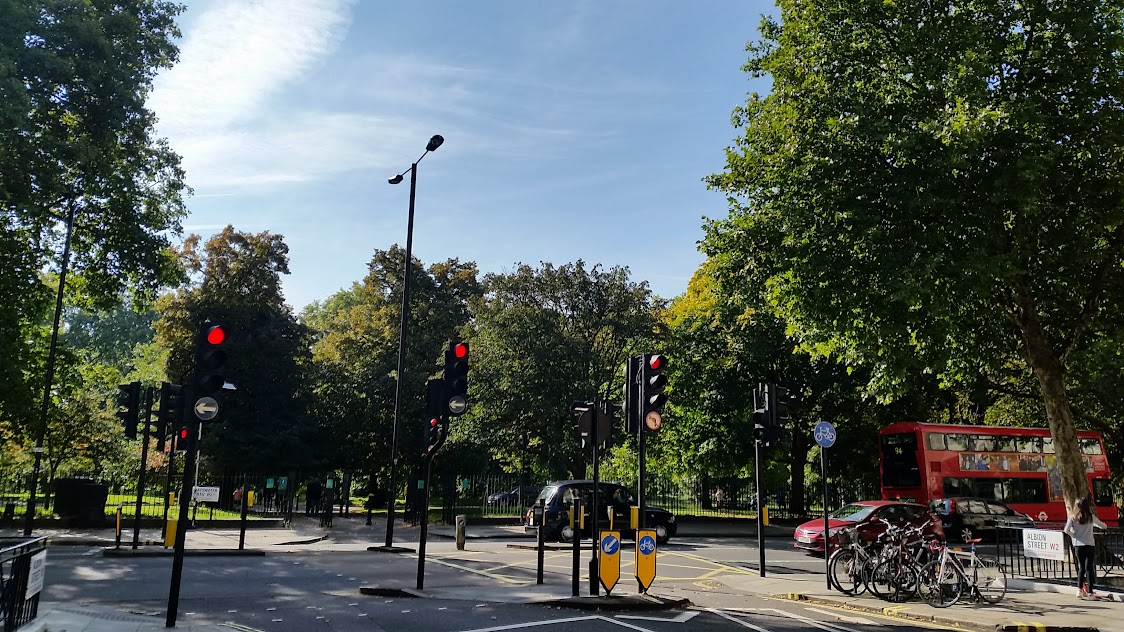 And although it is crowded and kind of funky, there was so much to see; one of the great things about London is its lengthy history. We were wheeling our suitcases down a not-very distinguished looking street, when glancing up we spotted this plaque

Having a husband and son in the medical professions this was cool; it was St. Mary’s Hospital.

This part of town had a distinctively Middle-Eastern cultural feel about it. The scents and spices, the women with covered heads and the no-nonsense men. The number one baby boy name in London is Muhammed.

After pulling our suitcases through the streets and my foot injury, I limped to our room. The apartment where we were staying was clean and open with newer furniture and amenities such as an iron and hair dryer. New to us but common to the area – 4 guest rooms shared a toilet room (no ventilation) and bathroom/sink (no shower curtain.)  You had to get the timing just right to be able to wash your hands after using the facilities and I always covered the toilet with tp. There was a “normal” kitchen with refrigerator, sink, washing machine, table and stools. I needed to rest my foot, so the guys went out and brought back food for dinner and Sunday meals.

Before the trip, we looked up the top 10 foods to try in London – a wise move since we had never heard of some of the deliciousness waiting to be discovered. The guys found Spotted Dick  and were advised to buy custard to go with it. The local markets became a big hit as we tried English foods and compared prices to the US. The markets were small but had lots of fresh breads, produce, local cheeses and other interesting foods including a leafy green I still haven’t identified. There were Snickers bars made in the Netherlands. and Rolo pudding, be still my heart. Newell and Tim’s first excursion was to Piccadilly Circus and they were impressed by the diversity and number of things to do in London.

Newell and I had a hard time crossing the streets with cars coming from the opposite direction – pretty sure Tim saved our lives a couple of times when he grabbed us as a car came careening around a corner. 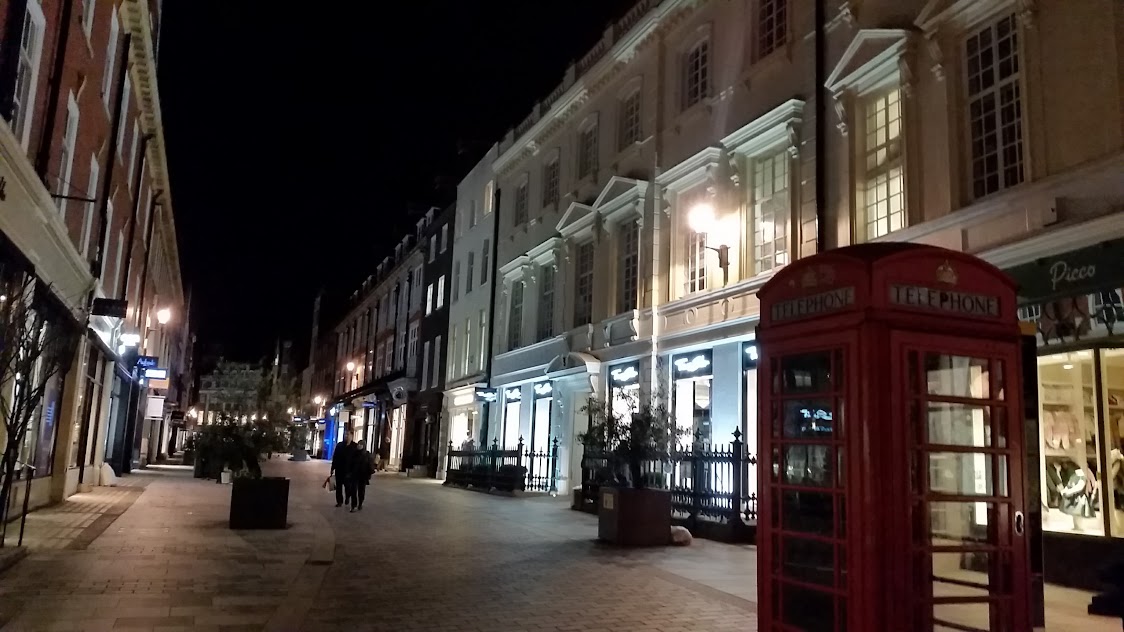 Midnight in London was 4 p.m. to our west U.S.A. sleep-deprived bodies, it would take a while to adjust.

Pam worked as an art specialist this past year at Kay’s Creek Elementary and we charged as many purchases as possible on our Delta Am Ex credit cards to accrue Skymiles for the trip.

We chose to go in the fall rather than the busier summer season; lodging and other expenses were priced lower and the sometimes extensive crowds were smaller according to locals.

We watched for great fares on Delta so we could use our Skymiles for Newell’s ticket.

3 months ahead: order passports, check immunizations (tetanus), get meds, watch for State Department travel advisories. Order airline tickets and select seats if traveling as a group. Reserve rooms and, if desired, tickets for special exhibits at museums and galleries.

Create an itinerary; include all reservation codes, contact numbers, schedules, maps and other important information. Share with each other and contacts not on the trip in case you need to be reached.

2 months ahead of time I tried to get tickets for a performance at Shakespeare’s (rebuilt) Globe Theater in London – all shows were sold out, next time plan farther ahead. Made reservations at the Swan restaurant near the Globe for an afternoon tea – turned out to be one of the highlights of the trip.  The Pink Floyd exhibit at the Victoria and Albert Museum was sold out when we arrived. I’m not sure we would have gone, but having the option would have been nice.

Even though we booked our rental cars through Enterprise and thought we were getting good rates, at the actual time of picking up the cars the prices skyrocketed, sometimes tripling. Insurance and who-knows-what-else added a huge amount. In the countries of Ireland, Germany and France the very narrow roads precipitated the need for small cars, when we were given a free-upgrade option in France we all turned pale and refused it. Get GPS – totally worth it when looking for AirBnB addresses and sites to visit, along with markets, restaurants and gas stations.

I was teased for bringing an assortment of snacks on the trip. Peanut butter in individual cups, Belvita breakfast biscuits,  protein bars, mixed nut, dried fruit, cracker and cheese sandwiches and the like. Haha – there were occasions we didn’t take the time to sit down for a meal in order to squeeze in one more experience, the protein snacks proved invaluable.

For most of our lodging we stayed in Airbnb houses – a mixed bag of luxury and near-squalor, more on that later.

Take a set of electrical plug adapters and a couple of extension cords. The plugs were different in every country. By adddng extension cords we were able to run a CPap at night and charge our phones, tablet and computer. You might need a transformer(?) to buffer the 220 volts that Europe runs on.

Watch your times – after searching around a blockful of scaffolding for the entrance to Westminster Abbey, we found it one minute late at 4:31 only to be denied entrance. We have several relatives buried there and were disappointed to have missed the opp to see their tombs (and the guard seemed to get a little too much pleasure at turning us away; being an American abroad is not always an advantage.) We left London too early the next day to return, maybe another time…