If it’s Monday, this must be Windsor. One of London’s underground trains delivers you right to Windsor, just blocks from the castle. Windsor is an upscale village with delightful shopping and dining (with resort prices).

Windsor Castle was started by William the Conqueror after he took the throne of England in 1066. This building is almost 1,000 years old and is the world’s oldest and largest working castle, it is one of the queen’s favorite residences today. Queen Victoria had a special train and car that transported her directly there, the train is on display.

On the days she is in residence, the royal apartments are closed to the public, we were lucky to visit when they were open. In the ticket office hangs a portrait of the Queen and her great-grandchildren.

The Norman Gate guards the west side.

This used to be a moat between the outer and inner walls of the castle.

St. George’s Chapel named for the Patron Saint of England 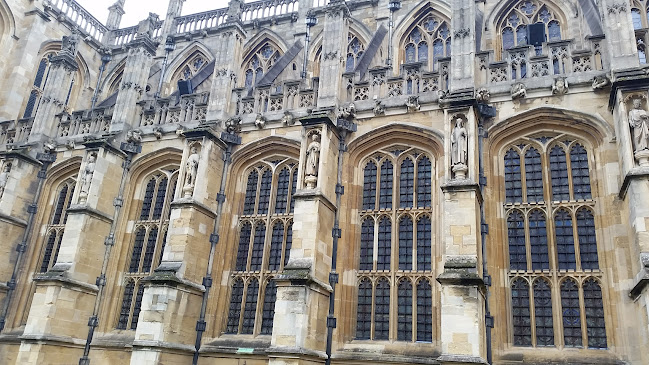 There are really no words to describe the grandeur and history of the Windsor Castle.

This is a yard where jousting tournaments were probably held, now more likely to be used for polo games.

After a trip back into London we took a river tour of the Thames and sat down to a dinner of fish and chips.

The Thames River is muddy, very muddy. As an estuary the water comes in and out with the tides. Taking a river tour provides an opportunity to see the city from a very different perspective.

The iconic Tower Bridge is one of the most identifiable landmarks of London.

Newer buildings have changed the city’s skyline and are often nicknamed by residents; the “Shard”, the “Gherkin,” the “Walkie-talkie” and the “Cheese grater” are among others.

This Cleopatra’s Needle obelisk was a gift from Egypt for Britain’s help defeating Napoleon. It’s twin is in New York City.

The London Eye – we didn’t make it up there on this trip.

Big Ben stands as a silent sentinel during its renovation.

After the cruise we were  off to find the fish and chips that Britain is known around the world for. We were not disappointed.

Look up the top “traditional” foods of the region you will be visiting so you know what to eat like the locals. In England we were looking for fish and chips,  Spotted Dick, bangers and mash, roast beef and Yorkshire pudding, scones, an authentic British breakfast and toffee pudding. All amazing -all dispelled the fable of flavorless English foods.