After months at sea in a small ship, a group of weary travelers, upon reaching the shores of North America, fell to their knees to give thanks. The Pilgrims at Cape Cod or Plymouth Rock in 1620?  No, Englishmen at the Berkeley Plantation, Virginia on December 4, 1619. Their orders included “the giving of thanks upon arrival and on the anniversary every year from henceforth.”
One of my ancestor, William Tracy, a governor of the Berkeley Colony, was so convinced of the potential of the early ventures into the colonies, that he invested heavily in them. Unfortunately, he died before he witnessed the amazing rise of “America.”  And though some of the celebrants of the first “Thanksgiving” in Virginia were killed by natives in the Indian Massacre of 1622, the Pilgrims in Massachusetts also carried on the tradition of giving thanks.
Four of my ancestors arrived on the Mayflower: Edward Winslow, Stephen and Elizabeth Hopkins and Humility Cooper. Times were hard and so many pilgrims died that first winter that they buried the dead at night so the Native Americans wouldn’t know how few of them were left. Only 53 survived that first brutal year. The struggles of the Puritans, the conflicts with and help given by the Native Americans, and the culmination of efforts led to the brotherhood of that shared feast in the autumn of 1621.
Many historians agree that the first American Thanksgiving was inspired by ancient Israel’s Feast of the Tabernacles, the celebration and gratitude for the harvest. Gratitude is a divine principle and is defined as: A feeling of thankful appreciation for favors or benefits received; warm appreciative response to kindness.
The power of gratitude can be life-changing. Studies on the health benefits of gratitude have shown an increase in energy in participants, improved sleep and other positive outcomes according to Robert Emmons of the University of California Davis, Michael E. McCullough of the University of Miami and Alexander Wood of the University of Manchester.
Hospitality binds individuals, families and communities in cheering and loving ways. Each of us has the potential to increase the positive energy in our community, world and the universe. As you gather your loved ones and give thanks for the good things in your lives, here are a few ideas to enhance your celebrations.
Blessings Centerpiece

Place branches with autumn leaves in mercury jars or vases surrounded by votive candles, acorn and pumpkins. Have guests write on paper tags things they are thankful for; tie onto branches. Or write on collected leaves with a thin permanent marker and scatter on the table. 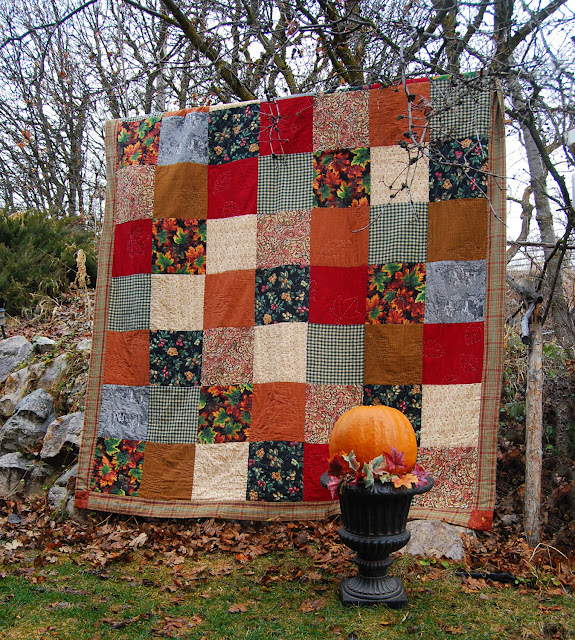 Cut 56 thirteen inch squares of autumn-color fabrics and sew together in eight rows of seven for a generous queen-size quilt. Add a thin batting, muslin for the backing, and add a simple border. Collect several varieties of leaves; trace on brown paper to make templates; lay the leaves on the quilt and outline in chalk. Stitch with embroidery floss in a contrasting color using a simple running stitch. Quilt around each block. This quilt can be used for a tablecloth or displayed from September through November.

As you plan your holiday menu, make a list of the foods and serving dishes. Plan your cooking and baking days and which foods may be made ahead and frozen or chilled. 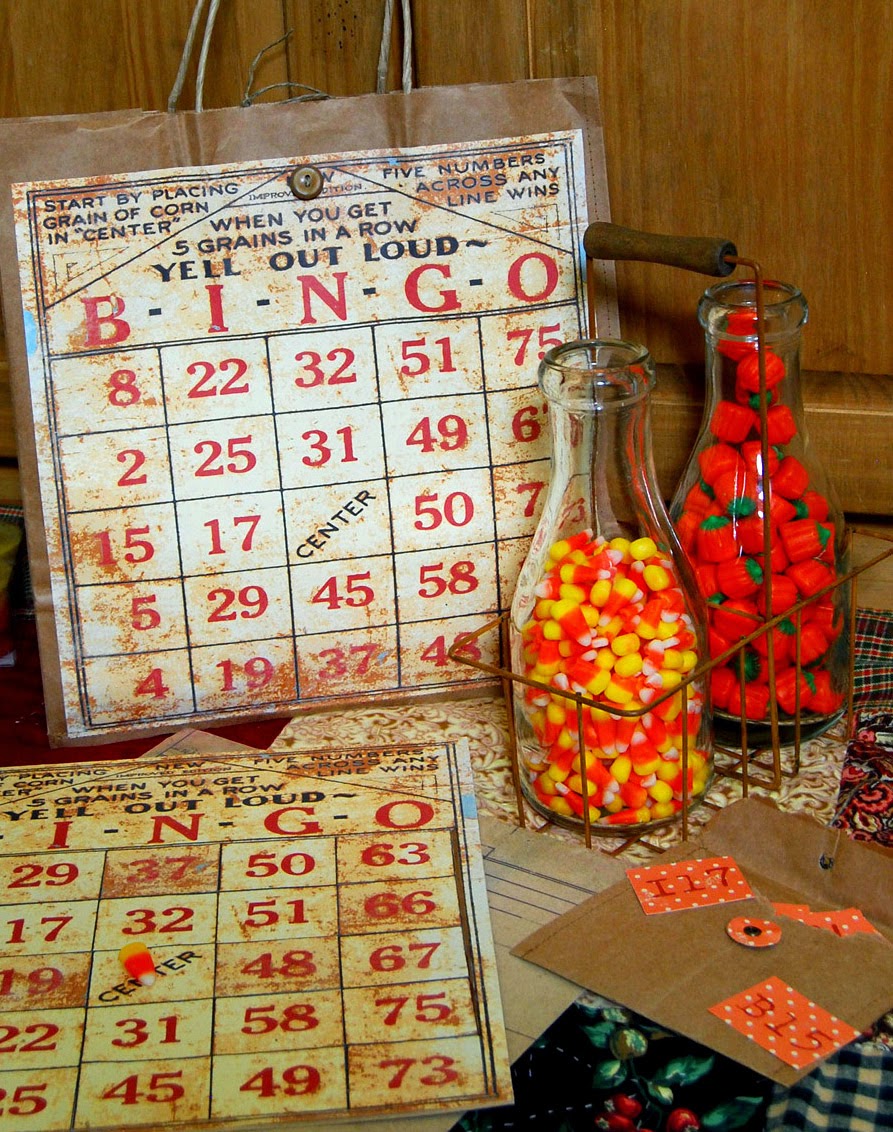 Create a family bingo game with copies of photos of family members. This is a good way for the children to learn about their ancestors. You may use vintage scrapbook paper and cardstock. This game uses candy corn for markers. Have the family pitch in by bringing plenty of small gifts and toys for prizes.

Although President Abraham Lincoln officially made Thanksgiving Day the fourth Thursday in November, personal schedules might suggest celebrating on a different day. Having Thanksgiving dinner the evening before gives you the day to take children to the mountains, beach  or local historic sites the next day. Yummy leftovers make a great picnic.    Thanksgiving on the Beach One year my clever mother and her friends packed up the feast, kids and grandparents and treated us to an authentic out-of-doors Thanksgiving on the beach at La Jolla in southern California. Yes it was cold and gray; but not as cold as the pilgrims experienced. It was an unforgettable holiday. With a little research you can find recipes and methods for a movable feast. 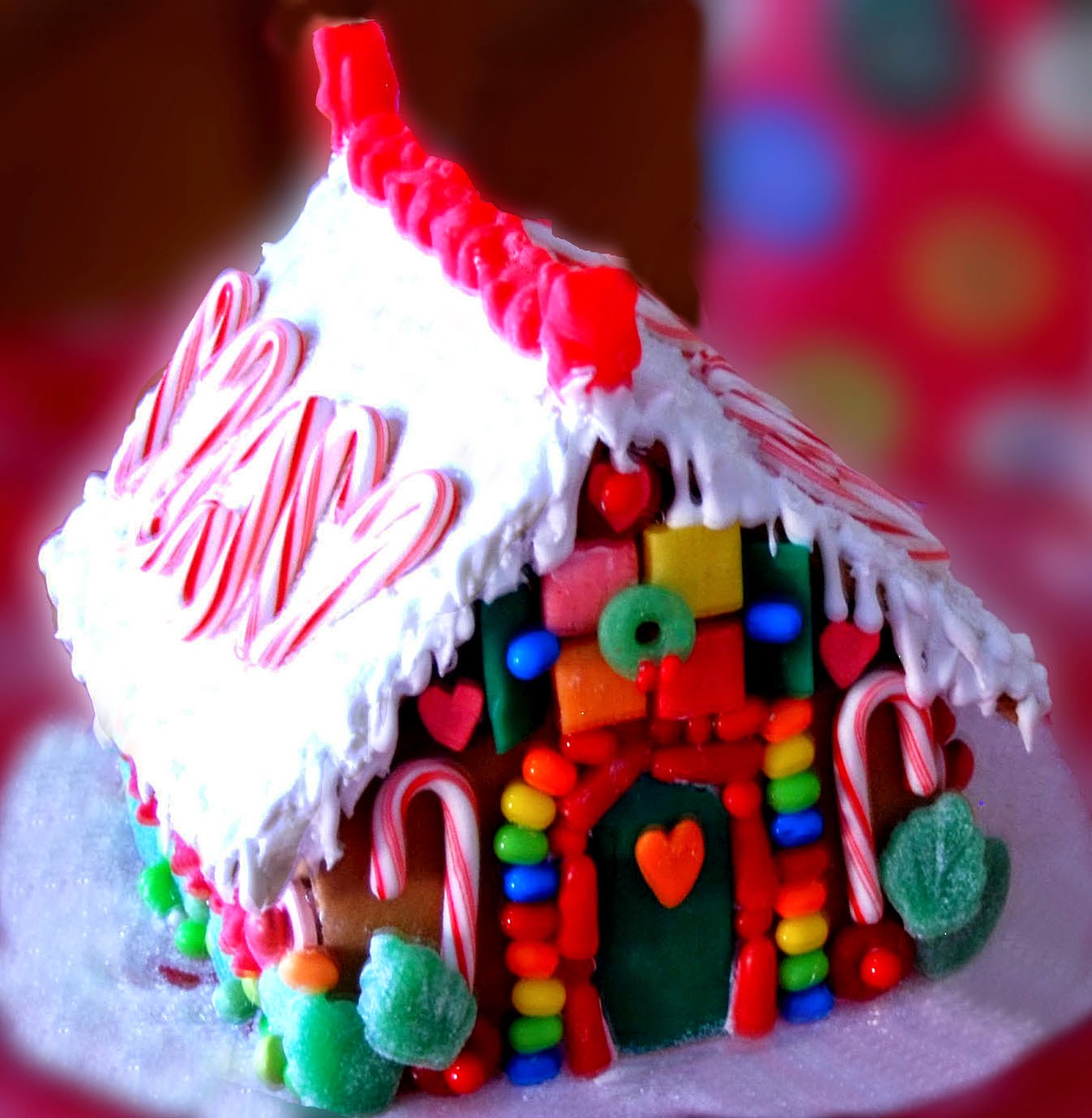 Make or buy gingerbread houses and assemble a few days before Thanksgiving. Have at least one per family to take home. After the dishes are done, let the decorating begin! Be sure to have lots of frosting and candy (buy on sale after Halloween) to decorate with.

Service OpportunitiesOne way to show gratitude is to share. During this time of year opportunities abound for helping the less fortunate. From serving dinner at homeless shelters, hospitals or retirement centers to gathering food for food banks and community kitchens; taking a pie to the fire department or police station or sending a treat box to military personnel and missionaries and other overseas volunteers. Look around your neighborhood to find people who would enjoy sharing a dinner with your family.

May you and your loved ones rejoice in the wondrous gifts you enjoy and thank the One who so generously bestows the blessings. Happy Thanksgiving!