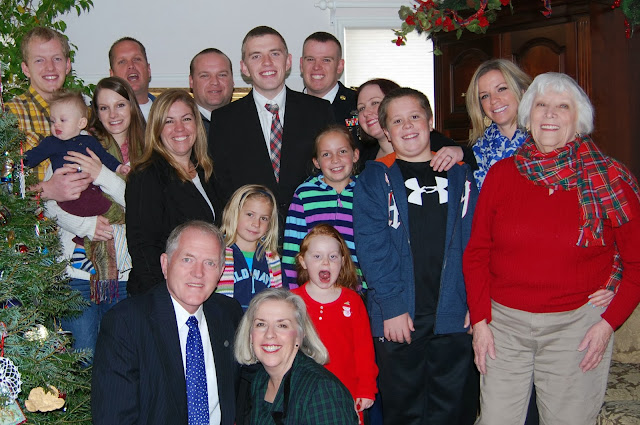 Christmas at our house is more like Easter, a fluid date that manifests itself when needed. We’ve had soldiers and missionaries going out and coming in and learned that the Spirit of Christmas is not felt on one day only. 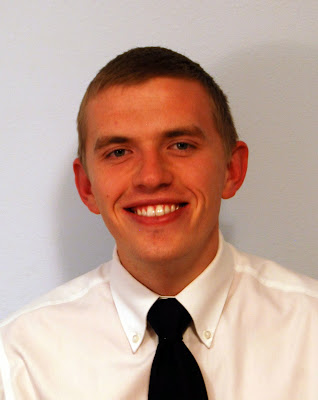 This year was one such Christmas. When our son Tim received his missionary assignment from the Church of Jesus Christ of Latter-day Saints in the fall, he was notified that he would be reporting for his two year volunteer assignment for service on December 18th. While I was excited for him, I was also disappointed that he would not spend a final Christmas at home. December 18th was the day I had entered the Los Angeles Temple many years ago to make my covenants with God and it was a special day to me. 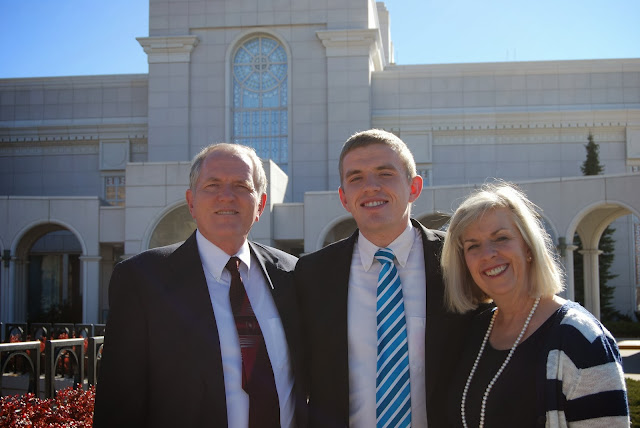 It seemed somehow fitting that the child I had been loaned to rear and enjoy for nineteen years should be returned to Him on that day for His purpose, sort of like Hannah and Samuel. We prepared to have an early Christmas to enable Tim’s brothers and sisters, all of whom live out-of-state, to wish him a fond farewell. Tim and I went out and found the biggest, most beautiful farewell Christmas tree we could fit in our house. 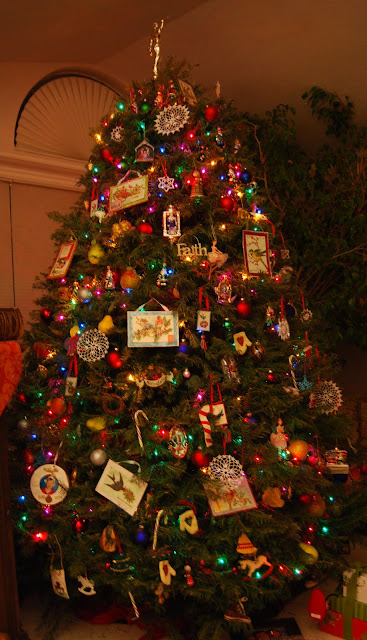 One Sunday night we decorated it and the one last gingerbread cottage that Tim had found hidden in the garage. Apparently gluing 100 pounds of candy on a giant ornament was just a prelude to the important project. 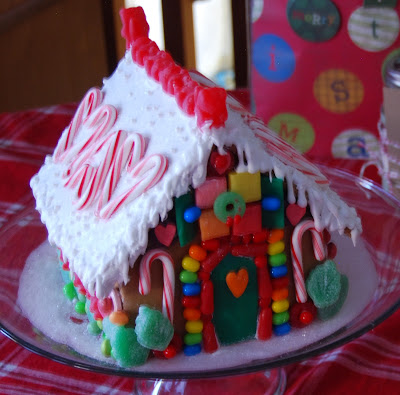 I am a returning college student, still trying to earn that elusive degree that any mother of several children knows may take second or even a further place back in her life. Enrolled in four upper-division classes, fall was especially busy. What I didn’t realize was that semester ended on December 20th. Twenty… twenty people coming into town for Tim’s farewell. Final critique on the 20th. Right. 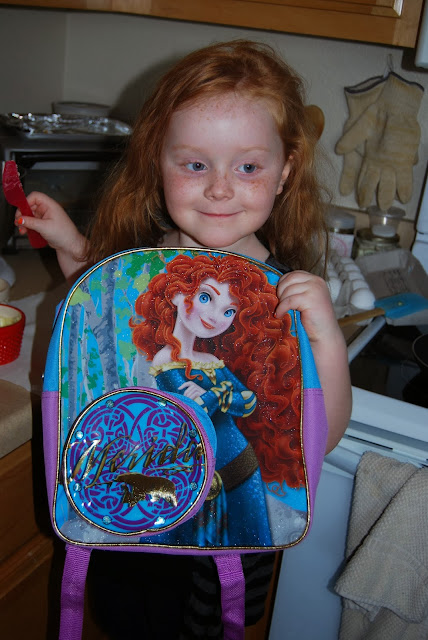 The family started arriving on Wednesday night the 11th. Heather and her four-year old Ellyza were first. Amid final projects and classes, I was still in school so Tim took Ellyza duty when her mom had a dental appointment. Sledding, games, coloring and lunch kept them happily occupied. Changed travel plans and last-minute scrambles kept us hopping. 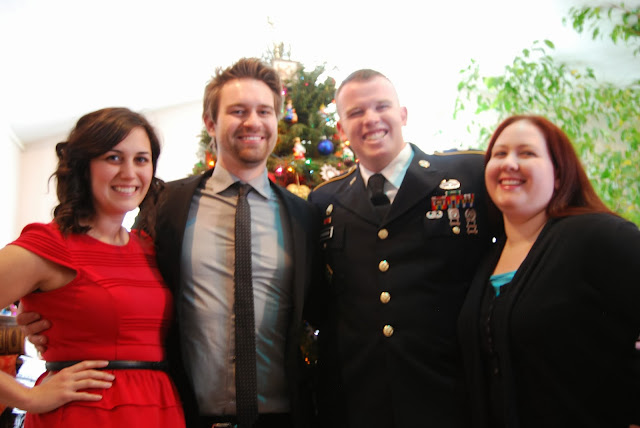 On Friday Grandma arrived, Bill flew in, Laurel and Richard and their three children descended. Andrew and Annie showed up with the cousins Face. Oh, and Dylan, Brianne and Max drove up from Arizona, I hadn’t heard they would be able to make it. It felt like the Griswolds Christmas Vacation without the stogie and thousands of Italian twinkle lights. Some very kind ladies from church brought in homemade soup and we supped. 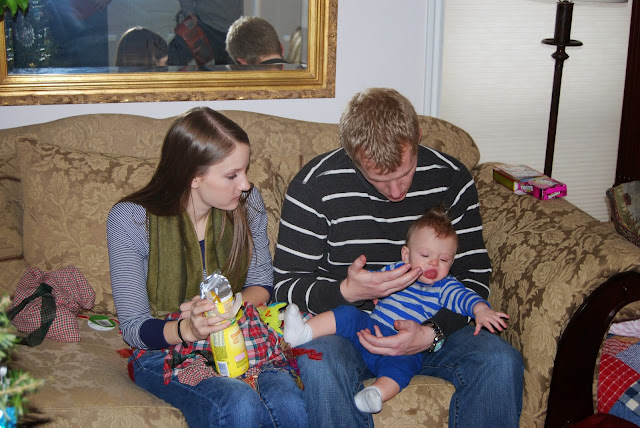 One wanted to go here, another there, we cancelled our Friday night outing, the babysitter and stayed in. The next morning we enjoyed our requisite breakfast burritos and cinnamon rolls (store-bought, sorry), we had the grandchildren open presents and found that Santa had left his bag filled with unmarked wrapped gifts for everyone. 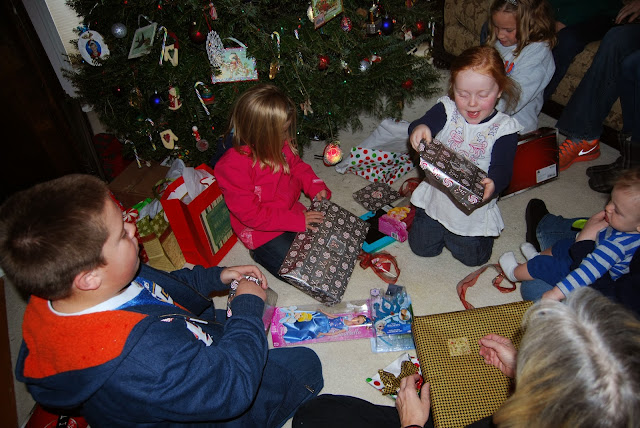 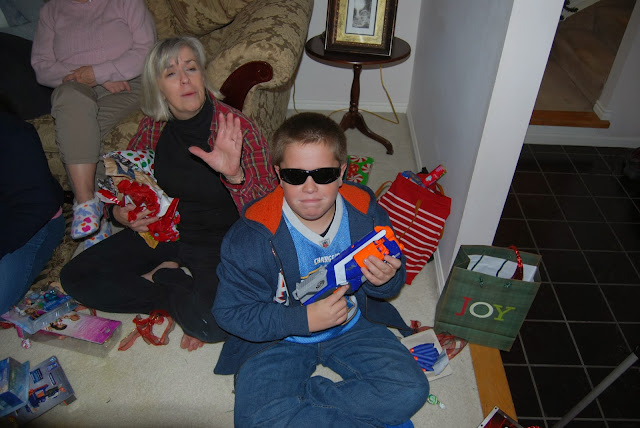 The Trevonator
Grandma got a yo-yo and bubblegum, Trevor, 11, got Christmas pasta and a bottle of Light Caesar dressing. After an interlude of trading and refusing, everyone seemed to end up somehow satisfied. Probably just glad to have some time together. Our soldier Andrew said it had been three years since he had been with all of his brothers and sisters. 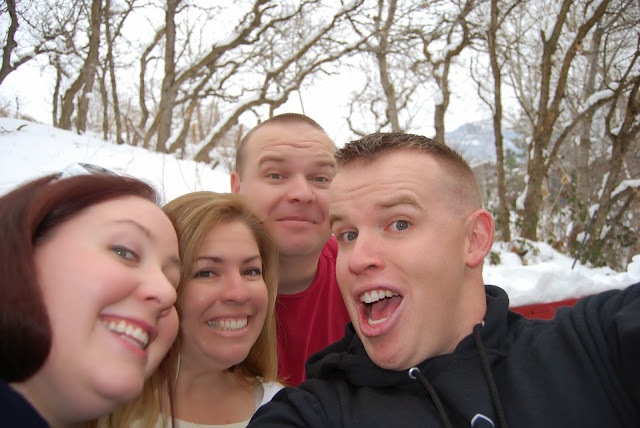 The lure of a white Christmas called. We worked to meet the challenge of outfitting over a dozen guests with gloves and sliding devices and sent them off to Happy Hollow, the local wild winter sledding hill. A few bumps and bruises later (no lost teeth) they dripped in for cocoa and pulled pork sandwiches. Sister Cindy and husband Dave arrived, looking dapper. 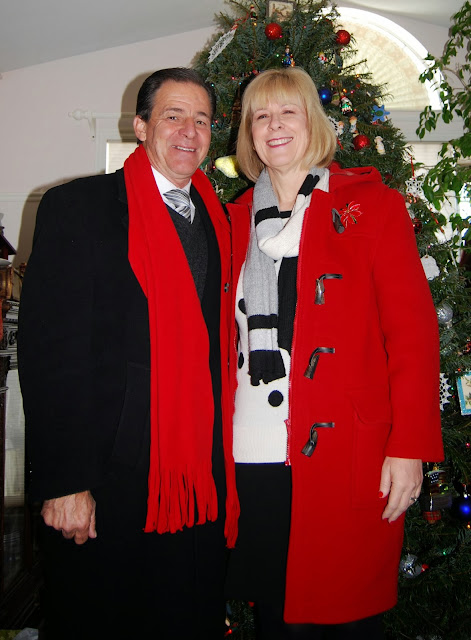 We waited for the evening newscast, Tim and I were interviewed on the local television station, KSL, about the Macy’s candy window we had created for the downtown Salt Lake store. That was fun.
http://www.ksl.com/?sid=28034321 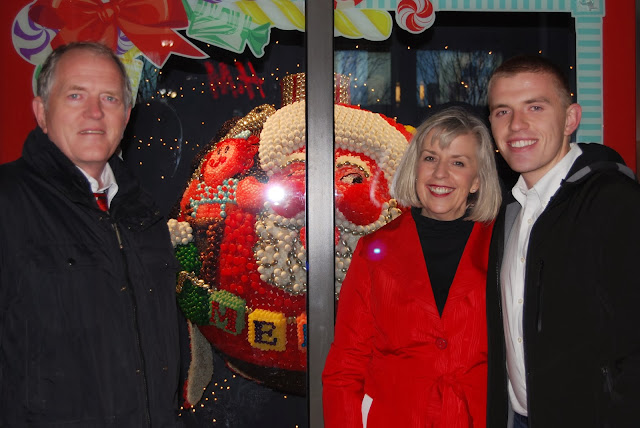 Everyone bundled up and piled in the cars to drive to SLC to see said window. We parked and inundated TRAX, the cable cars, which delivered us uptown right in front of our destination. After more cheering and spontaneous caroling, we crossed the street to see the lights at Temple Square. Grandma’s back didn’t keep up, so we found a wheelchair and enjoyed a very chilly tour around the brilliantly lit landmark. 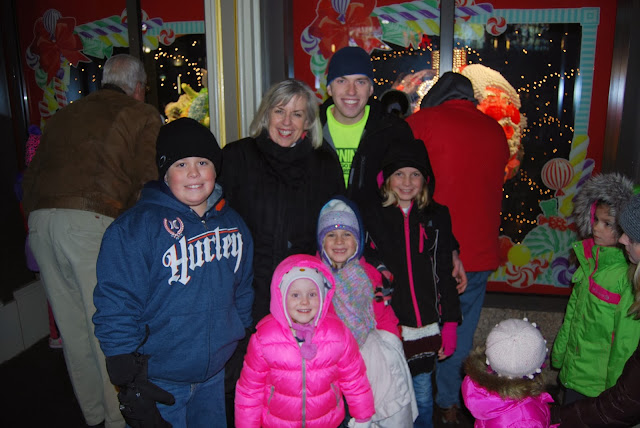 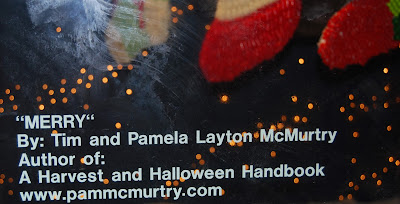 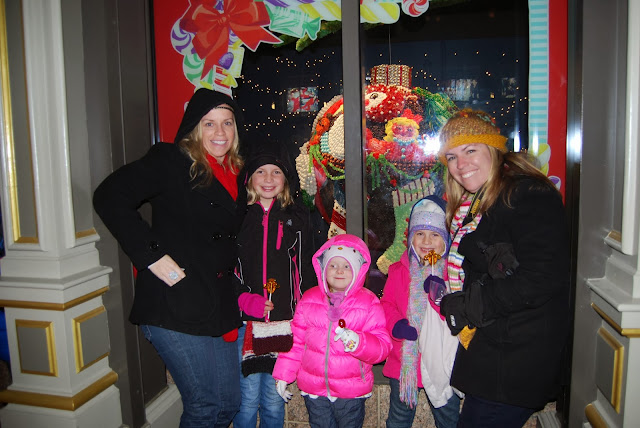 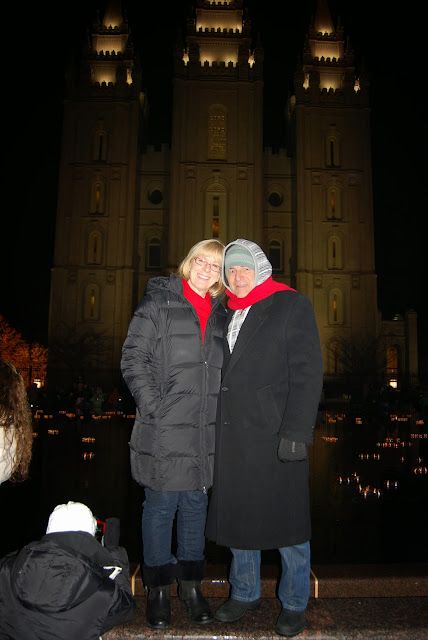 Home again for an early Christmas late-hour turkey dinner, per Tim’s request. It was only a few hours until we arrived at church for Tim’s farewell speech. 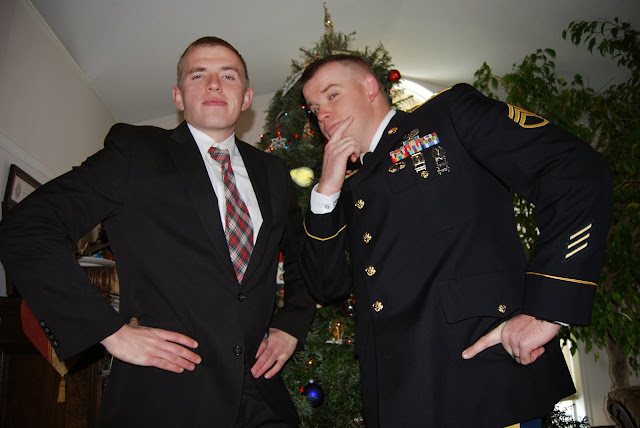 More family arrived. We had worked hard to get Sgt. Andrew to wear his dress uniform, emblazoned with ribbons and medals, he complied and looked every inch the wonderful soldier he is. Tim, dressed in his missionary suit, spoke about Jesus and His example of charity and he challenged everyone there to pick a special project and do something kind during the Christmas season.
Matt Shaw, a tenor, sang the most beautiful rendition of O Holy Night, my favorite carol (thank you) and another speaker talked about the Savior. Home for a few parting photos, then Laurel, Rich and their three took off for warm climes. 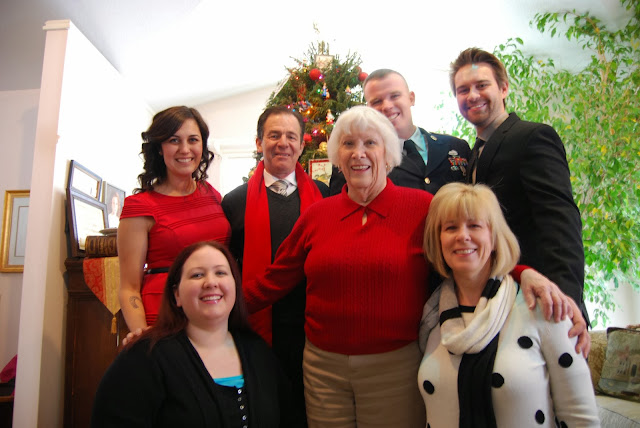 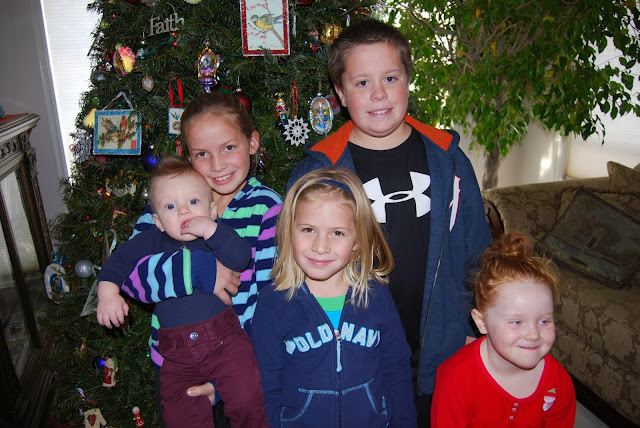 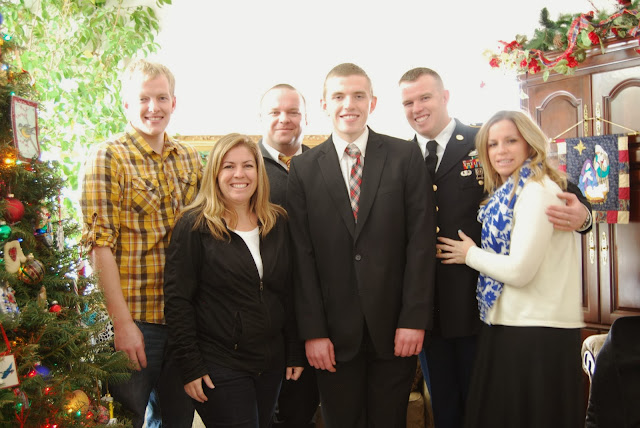 Another meal, naps, stories, games and last-minute mission advice (and a brief toffee and cookie-making experience, I had promised Ellyza that we would make cookies while she visited). And the day was done. Except for a couple of sick kids, a punctured air mattress and a zillion dishes it was a good day overall. So Christmas came early. Within a few days I’d finish my classes, all the company would go home and we’d kiss Tim and wish him good-bye for two years. 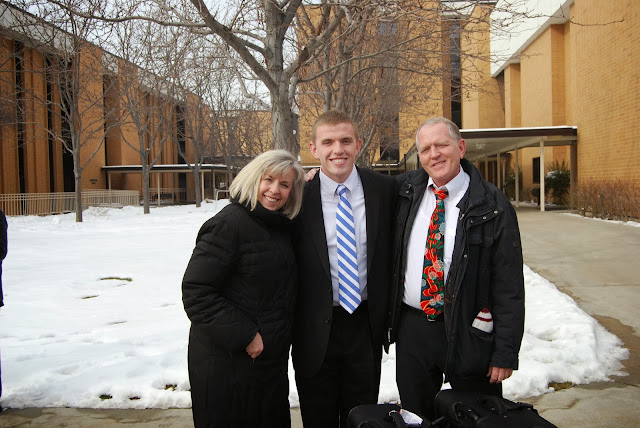 Then whatever bug is going around would bite us hard but eventually life would return to normal.
And I would be a full-time mother no longer.

P.S. What is normal? 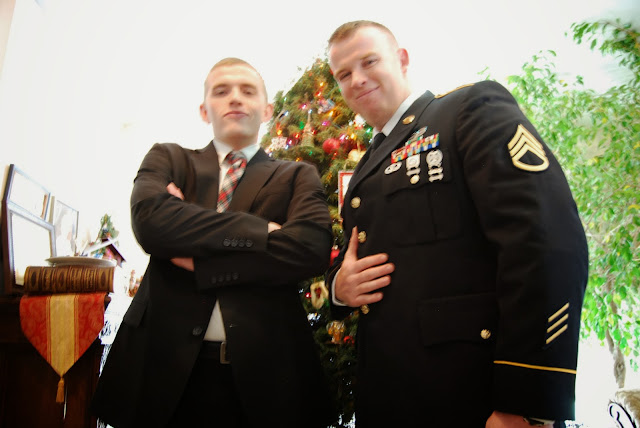 Merry Christmas to all and thank you for remembering the soldiers and missionaries in your prayers. This is one family that is grateful and truly blessed by your faith and we hoped you have been blessed by our service.

We wish you  a “Merry” Christmas!

Tim and I created this non-tradtional 100 pound candy ornament greeting for the residents and guests of Salt Lake City.

We were interviewed by KSL News about our experience creating a Macy’s holiday candy window; here’s the broadcast: 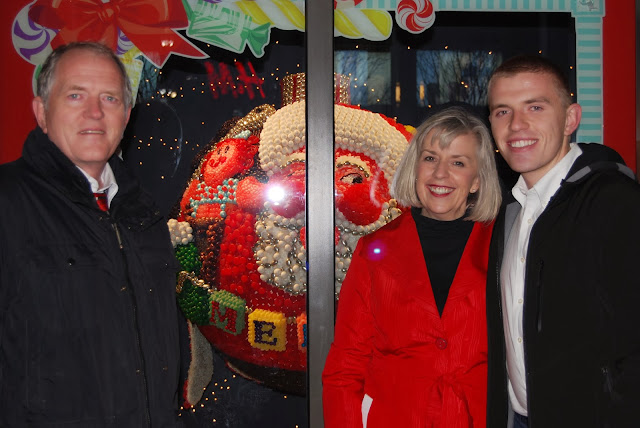