Driving from Utah to Illinois and back again in one week takes a special skill set (and few brains), no matter, I had a desire to visit the heartland of America; I love the Midwest!

We first stopped at my friend Jodi’s house and enjoyed the beauty of Fort Collins, Co. Jodi and I have been friends for 25 years and it is a treat to spend time with her. She’s funny. I forgot to unpack my camera, so you’ll just have to imagine how cute she is.

The next day we drove to St. Joseph, Missouri and camped near a lake where I saw my first wild fire flies! Would you believe they wouldn’t hold still for me to get a picture of them?

As we were driving up the freeway, my husband spotted what he thought was a cathedral – wait, there was a gold statue of an angel on the spire. It was the Kansas City LDS Temple. We stopped to pay pay our respects and tell the Lord how grateful we are for the wonderful things in our lives.

We also went to the cemetery where my great…great grandmother, Elizabeth Duncan Porter, a Revolutionary War heroine was buried. After being captured by the British, she was marched from Virginia, while pregnant, up to Canada where she was held prisoner for the duration of the war. Her husband, a member of the Virginia Militia, was sentenced to be executed but the commander liked him and eventually released him. Several chapters of the Daughters of the American Revolution are named for her.

The weather turned rainy so we checked into a hotel in Independence, Mo. The next day, July 4th, off we went to visit Walt Disney’s childhood home in Marceline, Mo. My youngest son Tim was born on Walt Disney’s birthday and we LOVE Disneyland so this was a necessary stop. Here are Newell and I under Walt’s “Dreaming Tree.”

And his barn where he and his brother and sister used to play. He had one built just like this in his yard in California. Disneyland’s Main Street was based on his memories of downtown Marceline.

We had kids waiting for us in Illinois so we scooted off to meet them. Because Newell and I are writers, we decided to make a quick stop at Hannibal, Mo. to see the haunts of Mark Twain.

Newell liked this house – check out the hewn stone facade. 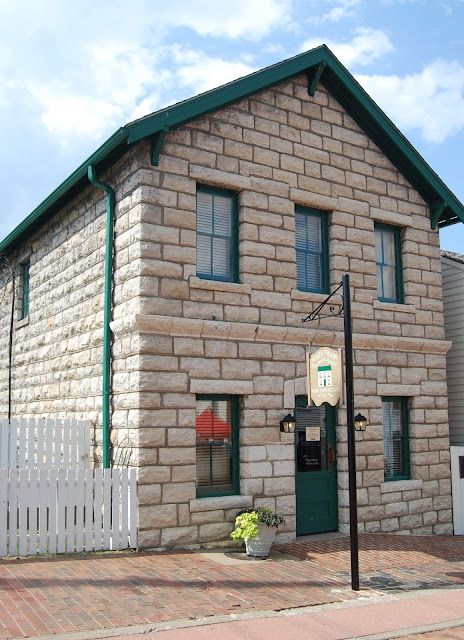 Samuel Clemmens/Mark Twain’s home. His dad’s law office was across the street. I love the brick sidewalks and streets.

Ok, here is where it gets interesting to a California girl. In the center of the Mississippi River, across from Hannibal, is an island that looks suspiciously like the “Tom Sawyer Island” in the “Rivers of the World” at Disneyland. Hmmm. We didn’t have time to explore the caves, will need to make another trip to Missouri

We arrived in Peoria, Illinois just in time to meet baby Max, catch the end of the sons’ softball game, grab a bite at Steaks and Shakes and be dazzled by the fireworks on the river – the folks in Peoria sure know how to celebrate Independence Day with style!

I imagine that we all ooohed and aaawed like this when the universe was created.
You know how folks like a good light show.
The next day we were treated to a pipe organ concert at the U of Illinois/Champaign by Dylan. Dylan, Karl and Tim are working in Illinois for Vivint this summer. If you need a top-notch home security system, they can hook you up.

After ping pong, billiards and darts at the LDS Institute of Religion, we visited the school’s fine art museum and enjoyed art from ancient Greece to modern Africa.

Sunday was the big day. At the Church of Jesus Christ of Latter-day Saints in Champaign/Urbana Illinois, Baby Max received his name and a priesthood blessing from his Dad, assisted by the men in his family. Here they are afterwards. These men traveled from Washington, Oregon, Utah, New York and Indiana to participate. I hope he felt the love.

Congratulations to Dylan, Brianne and Max. May you live long and enjoy the good things of life.

We left this happy group and drove for 23 hours to get Newell to work the next day.
This is how I spent my summer vacation. By Pam McMurtry.