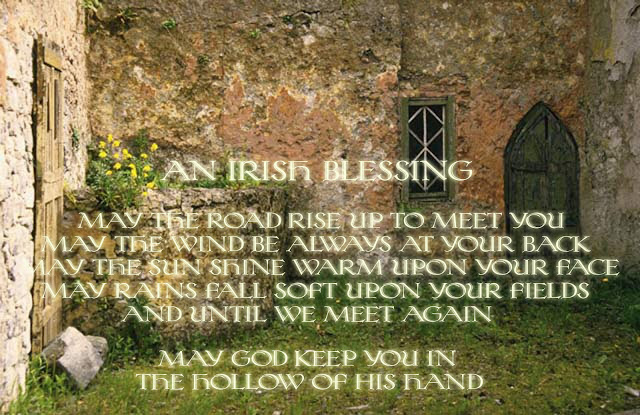 Did you know that St. Patrick wasn’t Irish?

Patrick was born Maewyn Succat, around 385 A.D in Britain. His father belonged to a Roman family of high rank and was a government official in Gaul or Britain. His mother was a near relative of the patron of Gaul, St Martin of Tours.

Maewyn grew up without faith even though his parents tried to teach him the gospel of Christ. When he was 16-years-old, he was working on his family’s estate when he was kidnapped by fierce Irish pirates who took him to Ireland and sold him to a wealthy Druid. For six years as he labored as a slave, tending sheep and living outdoors, he learned the language and ways of the Celtic pagans. Living in lonely solitude, he began to pray and repent of his youthful follies and his faith in God and love for Him grew.

One night he had a dream in which he was told to fast and prepare to escape, a ship was waiting for him; he fled and secretly journeyed two hundred miles to the coast. A runaway slave, he would have been killed if he was discovered. He said later that God directed his journey, showing him the way to go. When he arrived at the coast and prepared to board the ship, the captain refused to take him. He went a short distance away and prayed that the captain would change his mind. The sailors called after him, telling him to hurry back.

During the voyage, the ship wrecked and the crew and passengers were stranded in a deserted place. After four weeks, they were starving and began to be ill. The captain asked him why he did not pray to his God to help them. Maewyn asked the Lord for help; a herd of pigs appeared, providing the men with much-needed food. The captain kept Maewyn as a slave for several more years. One night he heard a voice that told him he would be free in two months, and he was. He now knew what he wanted to do with his life. He went to France to study Christianity at Tours, the monastery of his relative, St. Martin. He was ordained a bishop and given the Latin name “Patricus,” meaning “Noble” or “Father.” He finally arrived home and his family was overjoyed to see him, but Patrick had a strong prompting that he should travel to Ireland and teach the message of Christ to the pagan people there.

Returning to Ireland, he began to teach the people in their own tongue. As he served the people in meekness and love, they began to love him and listen to his message. He traveled among the pagans, converting the chieftains and tribes. He built churches and Christian schools. One story tells how he met the Druids as they gathered at Tara for a demonic conference one Easter. He withstood their magic and curses and held off an attack by the Arch-Druid leader who was killed. He taught the convened Druids twice. At first, the Irish chiefs resisted him and opposed his work, but because of his love for God and kindness toward all men and presistence, they began to believe in him and his faith. He served for over 30 years in Ireland. Almost all the Druid chiefs and their followers became Christians.

When Patrick died on March 17th, in the fifth century, there was great mourning throughout the land. The Irish people made the day a commemoration of the great Christian missionary, Patrick. And even today, fifteen centuries later, his life and work are celebrated throughout many nations around the world.

That you can read St. Patrick’s own autobiography and testimony? “The Confessio of Saint Patrick” was written in Latin and later translated into English.

That St. Patrick’s color was blue?

That the authentic Irish meal for St. Patrick’s Day was boiled bacon and potatoes? Corned beef was a dish that Irish immigrants from the Potato Famine era in the 1840’s started eating after they settled in New York. They were very poor and could only afford inexpensive cuts of beef. After saving money for several days they would, maybe once a week, purchase a piece of meat. Because there were no refrigerators yet, they learned to brine the beef in a salted liquid and spices to make it last for a few meals, that is where corned beef came from.

Before St. Patrick’s Day, have a family home evening about service. Explain that St. Patrick used the symbol of the shamrock to teach about the Godhead. It also is said to represent faith, hope and charity — if there is a fourth leaf it represents luck. To honor the tradition, pass out paper shamrocks or stickers and invite your family to do secret acts of service for each other. When a kind deed is done, leave a shamrock to mark the spot. The recipient can write a brief description of the service. Place the shamrocks on the table for decorations for your holiday dinner.

Nothing brings the Emerald Isles feeling like Irish music. CDs can be purchased at music, party or craft stores, or checked out from the library or downloaded. Can you dance a jig?

MAGIC AT THE MOVIES

For Irish-style entertainment, these movies can’t be beat! Disney’s “Darby O’Gill and the Little People;” Sayle’s “The Secret of Roan Inish;” and “Riverdance.” Don’t forget the t.v. travel shows featuring tours of Ireland.

IT’S NOT EASY BEING GREEN

Tint everything green with food coloring: green milk, green eggs, cookies, even green bread for sandwiches. Yes, it’s gross, but the kids get a kick out of it! A not-so-bad treat… green sherbet in lemon-lime soda.

Yes, St. Patrick’s color was blue, but today’s celebration calls for the green of Catholic Northern Ireland, or orange of Protestant Southern Ireland. Invite everyone to wear something green or orange to dinner. Decorate the house with pots of flowers, tied bunches of dried herbs, flowers or wheat with green ribbons to create a festive air.

READ ALL ABOUT IT

For a fun and enlightening time, read books with your children about leprechauns, St. Patrick and Ireland. Teaching them about other cultures helps them learn to appreciate and love people who are different from themselves.

Leave a plate of green treats on the doorstep of a neighbor or friend; with a note from an anonymous friendly leprechaun. Ding-dong-ditch  if you are fast enough!

AN IRISH BLESSING FOR YOUR HOME

May the road rise up to meet you
May the wind be always at your back,
May the sun shine warm upon your face
May rains fall soft upon your fields
And until we meet again,
May God keep you in the hollow of His hand.