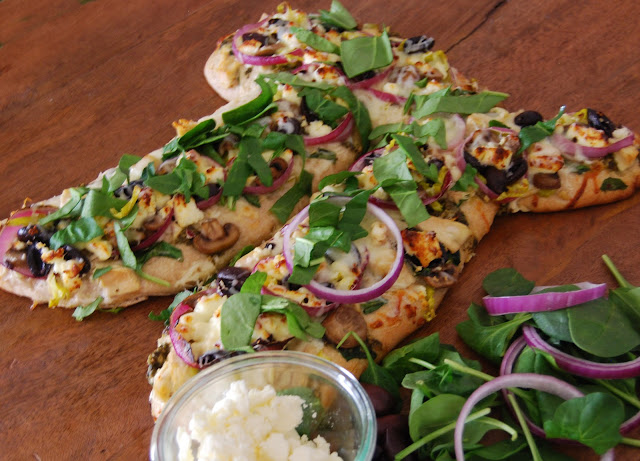 The number and symbol for pi are credited to the Greek genius Archimedes who lived in the third century. This Greek pizza entree for Pi Day is a tribute to the brilliant man.
GREEK (PIZZA) PI
Preheat oven to 400°. In a large mixing bowl stir together
2 C hot water

Leave in a warm place until foam covers the surface. While the yeast is rising,
lightly grease two 10” x 15” rimless cookie pans with olive oil, set aside. When foam covers
the surface of the yeast/water mixture, add
4 C. bread flour

Mix until a smooth dough is formed, Divide in half. Divide each half into thirds. Make
a pi symbol π and place one on each baking pan. Flatten the dough with your hands.  Let

rise until you can make a dent in the dough and it doesn’t puff up. Add

Add any of your favorite Greek toppings:
roasted chicken

Bake at 400° for 20 minutes or until the edges are golden brown.
Serve with a salad of sliced cucumbers, pepperoncini, mushrooms, spinach, sliced red onion, Kalmata olives and tomatoes dressed lightly