Skip to content
My ancestor,  William Tracy, came from England to America in 1619 to serve as Governor of the Berkeley Colony in Virginia. The company’s charter gave them instructions to kneel and give thanks when they arrived; and every year thereafter. America’s first Thanksgiving was held in Virginia one year before the Pilgrims arrived in Massachusetts in 1620.
Last month on my birthday we traveled to Andrew and Annie’s house in Virginia, where they live just a few minutes away from the “plantation”,  home of the Tracys 394 years ago.
William died in 1620, his wife, daughter and her husband were killed by Native Americans in the Indian Massacre of 1622. His one surviving son was sent back to England to learn a trade. 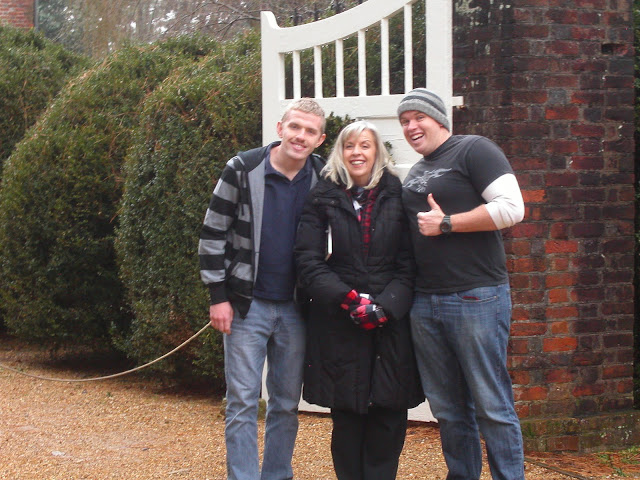 Andrew, Tim and I stand outside the gates of the Berkeley Plantation, near where our first
“American ” immigrant ancestors landed almost 400 years earlier. Andrew, an American soldier, discovered that “Taps” was composed at the Berkeley Colony in 1862. 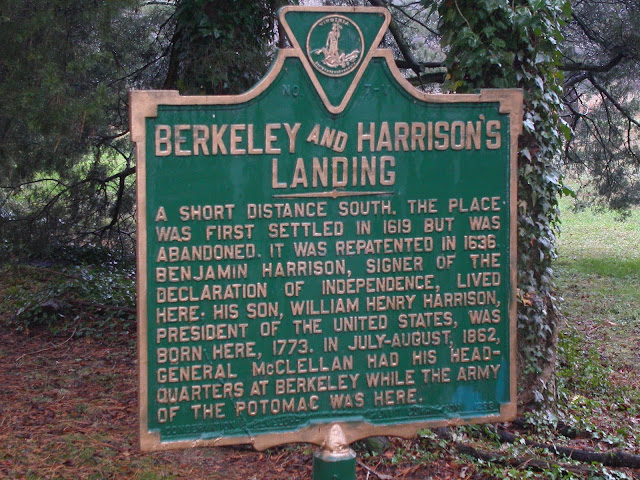 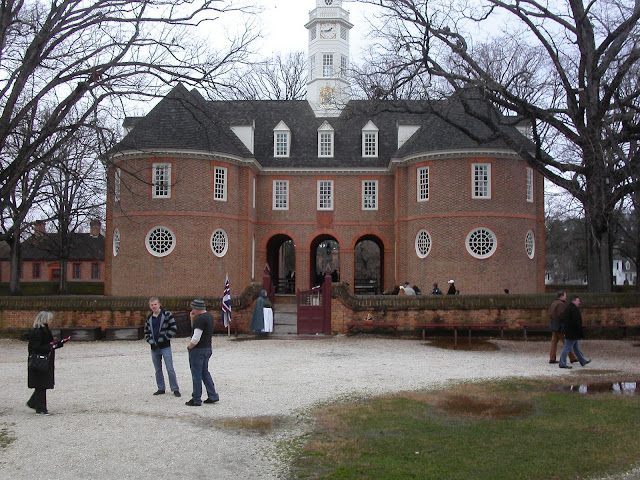 This was the capitol of Virginia until Thomas Jefferson moved it to Richmond. 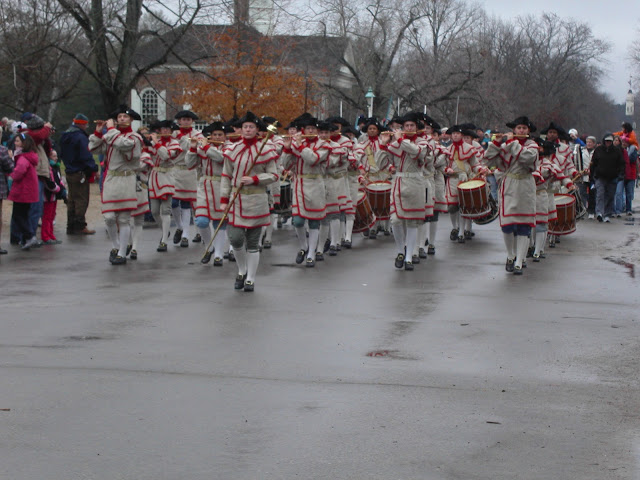 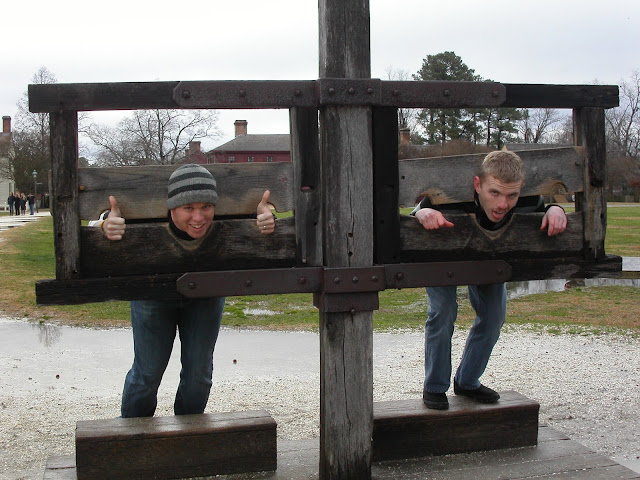 Are you going to forget my birthday card next year? I think not…. 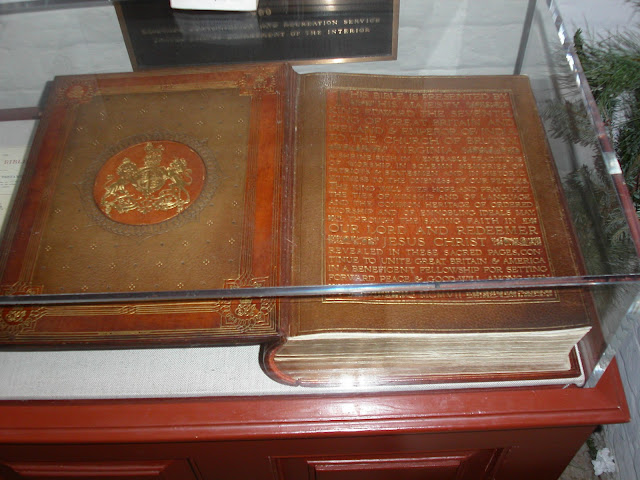 This King James Bible was a gift from the King of England to the Episcopal Church in America. Teddy Roosevelt commissioned this ornate stand to support and display the Bible. Lady Liberty stands with one foot on North America and one foot on Europe. Photo courtesy of Newell McMurtry 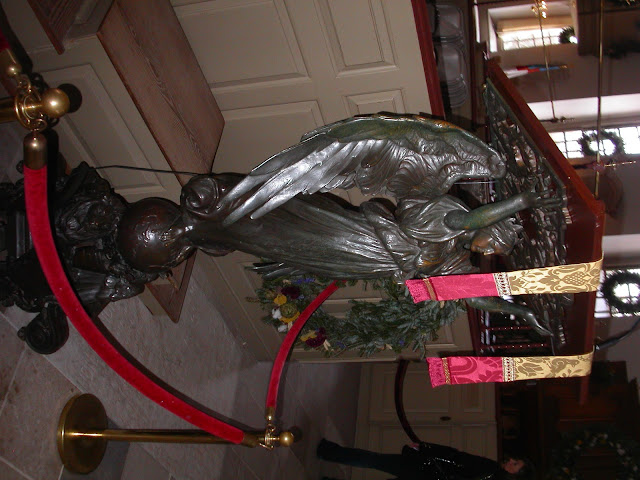 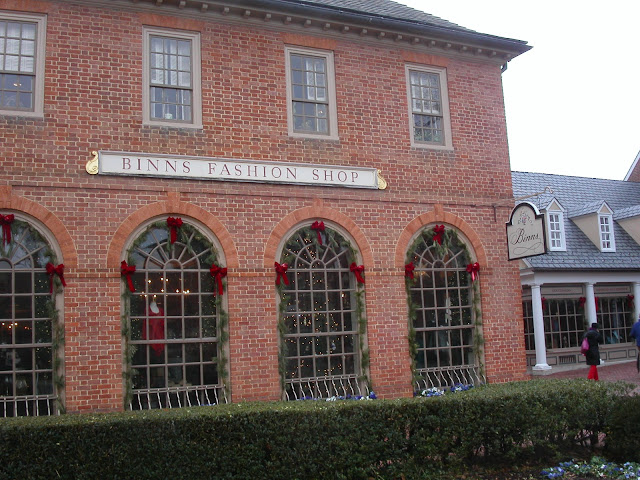 The newer areas of Colonial Willaimsburg are delightfully decorated for Christmas – this store reminded us of grandaughter Brynn (“Binns”). The boys and I stopped at Williams Sonoma for a sample of hot cocoa and English toffee while Newell inspected tartan plaids at a Scottish import shop. 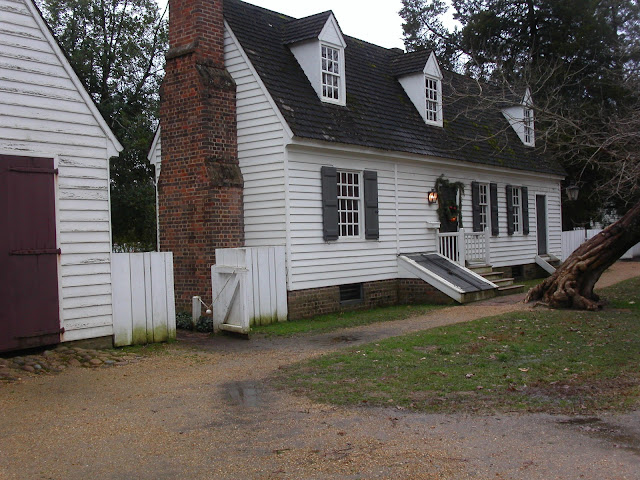 This old house was only about eight feet deep! 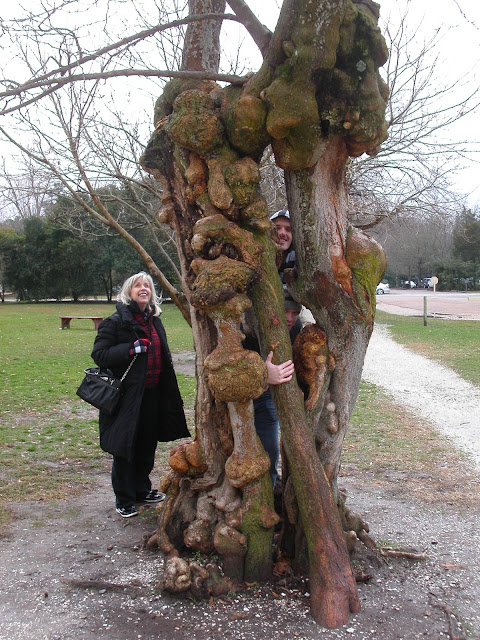 These trees appeared to have been transplanted from a hobbit yard in the Shire. 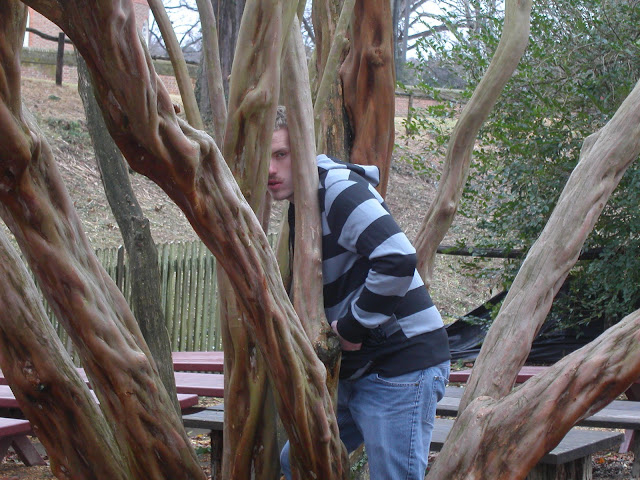 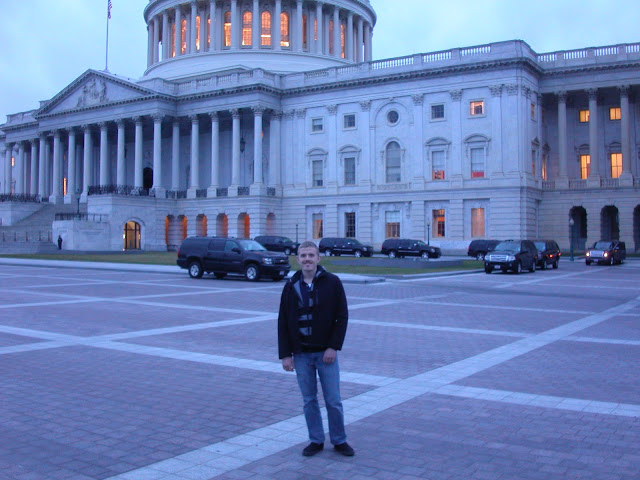 Tim is standing near the Capitol in Washington DC where we stopped on New Year’s Eve hoping to see the American Constitution. We arrived too late to view the document, but were able to see the Senate in session. There were a handful of Senators on the floor, presumably more arrived later to work on the “fiscal cliff” problem. The fleet of black SUVs parked around the building looked like they were out of a spy movie.
P.S. Did I mention I saw Dorothy’s ruby slippers at the Smithsonian? 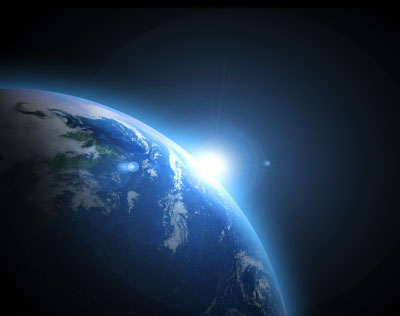 While bullying and hate crimes fill the news and desrupt the peaceful environment we long for; we may wonder what are the remedies? Some people strive to do the right thing; to please God, be an ethical person, to help others… there are myriads of reasons; social, emotional, physical. We may wish to help, but not know how to teach and encourage respect through our actions. For answers we turn to the scriptures, look to the examples of Jesus Christ. We may read Plato or Buddha, C.S. Lewis or other philosophers.

Last night as the storms raged, I sat in a Diversity and Health class at the University of Utah listening to a wise teacher construct a framework of respect that will be adhered to in her classroom. Her ideas were simple and powerful and with regards to Ms. Farnsworth, I will share her instructions on creating a respectful environment, with my additional comments.

RESPECT is treating people as equals. RESPECT is not the same as being nice in a passive-aggressive way, especially to avoid conflict. God says He loves all His children equally, who are we to judge, disdain or dismiss? (He does say He favors the righteous.) Wasn’t our country founded on the idea of universal equality? Isn’t this the foundation of the greatest country ever?

We must take OWNERSHIP for our opinions. Our experiences, beliefs and thoughts are our own and are unique; everyone comes from a different place, with different experiences and outlooks. Qualify a statement with “I believe…” or “I think…”, my favorite – “I could be wrong, but…”

SUPPORT statements with facts and information, cite outside sources and studies that back up assertions.

LISTEN RESPECTFULLY. No side conversations, rolling eyes or sighing. No rude comments, and especially no loaded passive-aggressive or dishonest questions that are in reality, trying to hurt others, “But don’t you think…”

Maintain CONFIDENTIALITY and be RESPONSIBLE for the information you know (or think you know). Too many lives and reputations are disrupted by lies, half-truths and innuendo.

If you feel OFFENDED or DISRESPECTED contact the person immediately (privately.) I need to do this better, it’s much more effective than a grudge.

As I walked through the driving snow after class, I thought of Christ’s response to the woman who was taken in adultery (where was her partner?) He, who would ultimately pay the penalty for her act if she repented,  simply said “Go and sin no more.” No abuse, dismissive behavior, gossip or punishment. We have much less at stake, but our behavior does affect the emotional climate of our culture and the world.

It’s time for a climate change! Let’s do our best to bring warmth and kindness to a cold and weary world.