Our great… great grandfather Chauncey Gilbert Webb lived in this house near his family’s blacksmith shop. 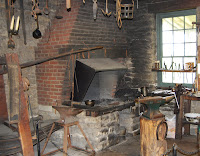 C. G. and his brothers operated one of 38 blacksmith shops in Nauvoo in the 1830s – 40s. Their shop was on Parley Street; the route the Saints took as they left Nauvoo to cross the frozen Mississippi River when they were driven from the city on a cold February day.

The Webbs also built many of the covered wagons the Mormons used for their relocation to Utah. According to one account; Chauncey was with Brigham Young’s group that entered the Salt Lake Valley in July 1847. He also helped rescue the Martin Handcart Company when they became stranded on the plains.

Grandma and Grandpa Chesnut look over a wagon.

Our other great…great grandfather Christopher Layton had a farm near this location. He marched from Iowa to San Diego with the Mormon Battalion to fight the war with Mexico, brought Saints from England and settled Utah and Arizona. He’s buried with our great…great grandmother Caroline Cooper about a mile from our home in Utah.

Back to the present to enjoy a riverfront dinner and chance to visit with Brianne’s charming family.

Karl brought over an unbelievable assortment of Japanese snack foods: including KitKats in flavors I’d never heard of – wasabi? It was good…