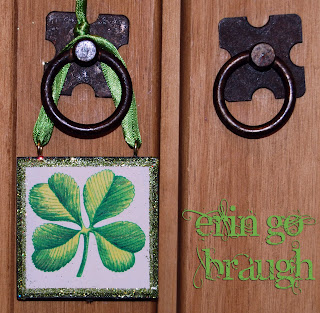 I was asked to give a Relief Society class about St. Patrick’s Day in Newport Beach several years ago, they thought I was Irish. Actually McMurtry is Scottish; I’m a Layton (English) and love Euro, American and world history. I have found Irish ancestors as I’ve worked on my genealogy and did enjoy researching and cooking my way through the presentation.

A brief history of St. Patrick, the Patron Saint of Ireland. If you think you can’t fully enjoy St. Patrick’s Day because you are not Irish – not to worry; he wasn’t either!

Patrick was born Maewyn Succat to parents Calphurnius and Conchessa. His father belonged to a Roman family of high rank and was a government official in Gaul or Britain. Conchessa was a near relative of the patron of Gaul, St Martin of Tours.

Maewyn grew up without faith. When he was sixteen years old, he was working on his family’s estate when fierce Irish pirates attacked and kidnapped him. They took him to Ireland and sold him to a wealthy druid. For six years he labored as a slave, tending sheep and living outdoors. He learned the language and ways of the Celtic pagans. In his lonely solitude, he began to pray and repent of his youthful follies. His faith in God and love for Him grew.

One night he had a dream in which he was told to fast and prepare to escape, a ship was waiting for him. He fled and secretly journeyed two hundred miles to the coast. As a runaway slave, he would have been killed if found. He said later that Heavenly Father directed his journey, showing him the way to go. When he arrived at the coast and prepared to board the ship, the captain refused to take him. He went a short distance away and prayed that the captain would change his mind. The sailors called after him, telling him to hurry back. During the voyage, apparently the ship wrecked and the crew and passengers were stranded in a deserted place. After four weeks they were starving and began to be ill. The captain asked him why he did not pray to his god to help them. Maewyn asked the Lord for help; a herd of pigs appeared, providing the men with much-needed food. The captain kept Maewyn a slave for several more years. One night he heard a voice that told him he would be free in 2 months, and he was. He now knew what he wanted to do. He went to France to study the gospel at Tours, the monastery of his relative, St. Martin. . He was ordained a bishop and given the Latin name “Patricus,” meaning “Noble or Father.” When he finally arrived home, his family was overjoyed to see him. But Maewyn had a strong prompting that he should return to Ireland and teach Christianity to the pagan people there.

Returning to Ireland, he began teaching the people about Christ in their own tongue. As he served the people in meekness and love, they began to love him and listen to his message. He traveled among the pagans, converting the chieftains and tribes. He built churches and started Christian schools. One story tells how he met the Druids as they gathered at Tara for a demonic conference. He withstood their magic and curses and held off an attack by the Arch-druid leader who was killed. This happened on Easter. He taught the convened druids twice. At first the Irish chiefs resisted him and opposed his work, but because of his love for God and kindness toward all men and refusal to give up, they began to believe in him and his faith. He served for over 30 years in Ireland. Almost all the chiefs and their followers became Christians.

When Patrick died on March 17th, toward the end of the fifth century, there was great mourning throughout the land. The Irish people made the day a commemoration of the great Christian missionary, Patrick. And even today, fifteen centuries later, his life and work are celebrated throughout many nations around the world.

Here are some of the symbols and legends associated with St. Patrick:

The shamrock or three-leaf clover was used as an object lesson by St. Patrick. He taught the three leaves represented the holy trinity; The Father, Son and Holy Ghost united in one purpose in saving mankind.

Another interpretation of the shamrock is that the first leaf stands for faith, the second leaf for hope, the third for charity. If there was a fourth leaf it stood for luck. That is why a four leaf clover is considered lucky!

The druids believed in magic. As they became Christian, the practice of magic became less important and in the stories or legends of magical creatures, they became smaller too. Leprechauns and fairies in the tales became “wee folk.” The word “luchorpan” means “wee ones”. On St. Patrick’s Day the fairies were said to have danced in celebration until they wore out their shoes. The Leprechauns repaired their shoes and received gold coins from the fairies. The Leprechauns were miserly creatures that hoarded their gold coins keeping, them in a pot. If captured, a Leprechaun would trade his pot of gold for freedom.

St. Patrick was said to have driven all the snakes out of Ireland. To this day, there are no snakes in Ireland.

The flag of Ireland is green, white and Orange. Green is for the Catholic faith, orange for the Protestants and white for the unity of the two.